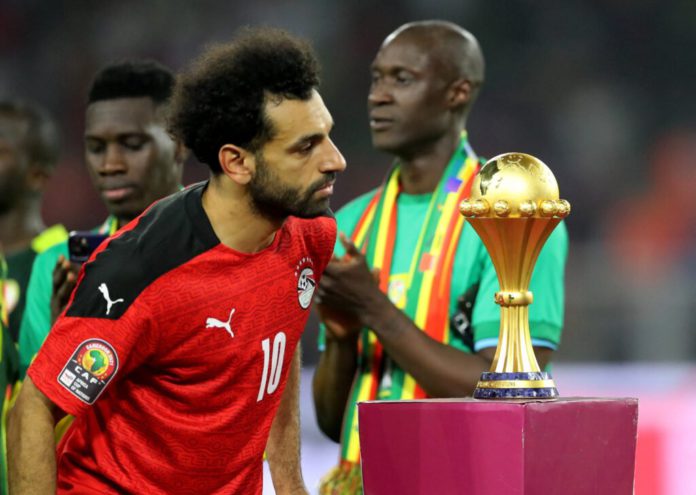 Mohamed Salah made a rallying speech to his Egypt teammates after their AFCON final defeat to Senegal, urging them to ‘take revenge’ in March.

The Pharaohs lost on penalties in Sunday’s showpiece in Yaounde after the two teams drew 0-0 over 120 minutes.

Salah was down to take Egypt’s fifth spot-kick but never got the chance to step up after his Liverpool teammate Sadio Mane decided the game by scoring Senegal’s fifth penalty.

In the dressing room after the match, Egypt captain Salah addressed his tired and forlorn teammates.

“We played four matches all 120 minutes in about 12 days,” he said. “But it’s in the past now, we have the games against them next month and inshallah we will take revenge on them.”

THIS IS TRENDING:   Chelsea Stage Comeback To Draw 2-2 With Liverpool At Home

Egypt will take on Senegal over two legs in the World Cup African playoffs at the end of next month.

Both countries finished top of their groups in the second round of qualifying and have now been drawn against each other to battle for a place at the Qatar tournament later this year.

The first leg will take place in Cairo on 23 March before the second leg in Dakar on 29 March.

While Senegal’s victory in the AFCON final will certainly give them confidence ahead of the fixtures, it will also give Egypt extra motivation.

THIS IS TRENDING:   Pele To Undergo Chemotherapy After Leaving Hospital

‘”It’s well known that we, Egypt, do not just take a fall,’ Egypt goalkeeper Gabaski told Goal. ‘When we fall, we get up, even though the fact we’ve lost today makes us feel like we’re in a difficult and delicate situation.

“We have other challenges ahead of us next month, with the same teams involved, and if it’s God’s will, we will continue and pursue our objectives.

“We have several more matches coming up in the coming months, and we have to win.”

THIS IS TRENDING:   2022 WCQ: Liberia To Host Super Eagles In Morocco

THIS IS TRENDING:   We Were Right To Sack Maxwell Konadu – Kotoko CEO

THIS IS TRENDING:   Nigeria Twitter Trolls Buhari For AFCON Exit