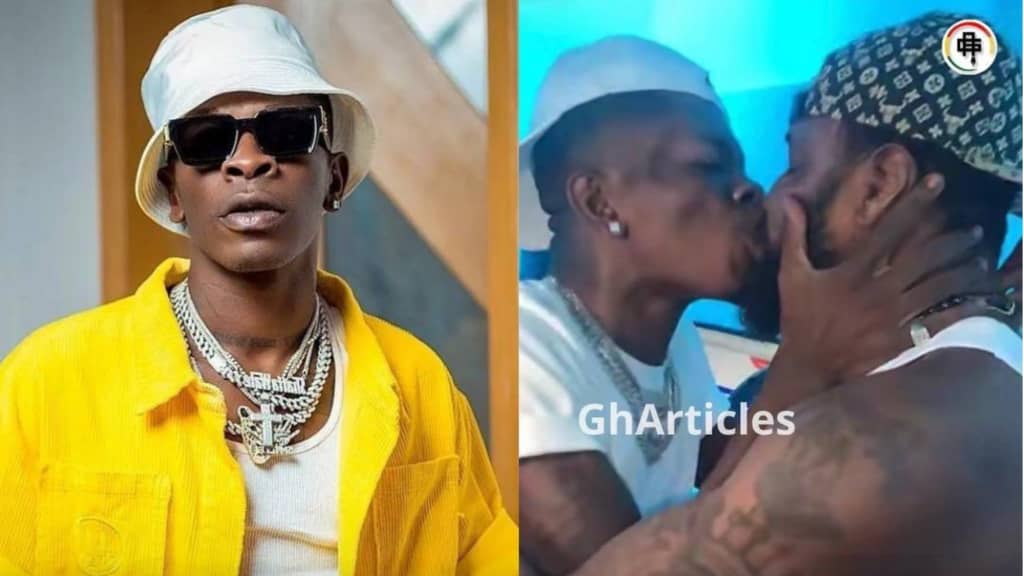 A few hours ago, Shatta Wale, a dancehall artist was seen sharing a romantic kiss with his new lover, Elfreda in viral video on her birthday.

However, he has been spotted in another viral video kissing a male adult said to be his friend.

The video making rounds on social media shows the ‘Melissa’ hitmaker’s hand on the neck of the unidentified guy while kissing him.

The musician born Charles Nii Armah Mensah Jr has from the beginning of the year been trending due to controversial issues such as calling out actress Jackie Appiah for being “fake”.

Social media users have reacted to the recent controversy stirred up by Shatta Wale. Some seem unperturbed while others say the singer has joined the LGBTQ+ community.

Those in support of his actions cited instances where football players in international countries have been seen kissing each other as a sign of love.

This is the reason why Shatta Wale said Ghana bi village. pic.twitter.com/oo06V43sMf

Opposers have said Shatta Wale should not be seen kissing his fellow gender as that goes against the customs and traditions of Ghanaians.

The police should arrest shatta wale for accepting LBGTQ while Ghanaians don’t support such things. If they don’t arrest him by the close of the day I won’t take laws in Ghana here serious again.

Shatta Wale fans will support everything. G its Gay to kiss a fellow brother in our society and yall should get people’s displeasure on that Video where Shatta was Kissing the guy. Asem oo

THIS IS TRENDING:   My Life Is In Danger And I Am On The Run Because This Country Want Me Dead - Shatta Wale Finally Speaks

THIS IS TRENDING:   Stonebwoy Signs To Def Jam

THIS IS TRENDING:   Lil Wayne Discloses How He Attempted Suicide At Age 12 (Video)