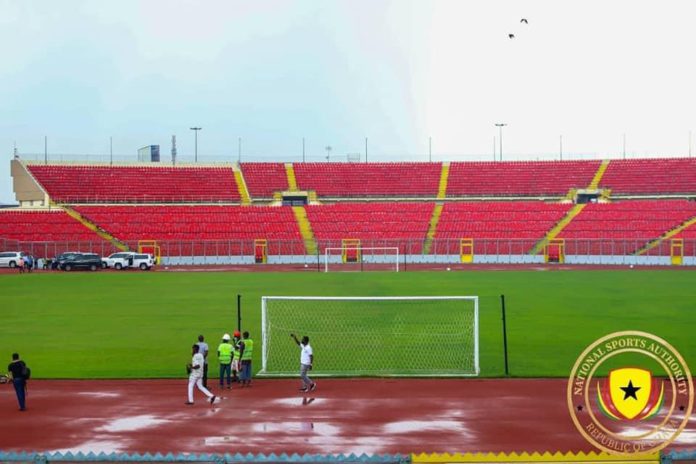 The Confederation of African Football (CAF) has granted a one match approval for Baba Yara Sports Stadium in Kumasi to host the World Cup Qatar 2022 play-off match between Ghana and Nigeria.

The approval comes after a CAF Licensing Inspector visited the Baba Yara Sports Stadium last Sunday to inspect the facility.

In a letter signed by CAF Development Officer, Raul Chipenda and sent to the General Secretary of the Ghana Football Association, Prosper Harrison Addo, Esq. and copied to FIFA, CAF stated that:

Reference to the CAF stadium inspection conducted at Baba Yara Sports Stadium (Kumasi) for the FIFA World Cup Qatar 2022 African qualifiers playoff round match, Ghana Vs. Nigeria scheduled for the 25th of March 2022, following the analysis of the report, we have taken the following decisions:

THIS IS TRENDING:   Hearts Of Oak Draw With Rivals Asante Kotoko

The letter further stated that the following conditions must be met before the match against Nigeria. They include:

CAF again stated that there shall an onsite stadium inspector to conduct further assessment of the facility until the day of the match and that in the event that the above mentioned conditions are not met before the match; financial sanctions shall be imposed on Ghana.

The Baba Yara stadium replaces Cape Coast stadium which was originally scheduled to host the match.

THIS IS TRENDING:   Pele To Undergo Chemotherapy After Leaving Hospital

THIS IS TRENDING:   Hearts Of Oak Draw With Rivals Asante Kotoko
The Black Stars booked their place at the quadrennial tournament on away goals following a 1-1 aggregate score against West African rivals Nigeria in March.
“I shall surely be in Qatar but maybe a pundit or let’s see,” Gyan added.

THIS IS TRENDING:   ‘I Will Be The Happiest Man If Ghana Qualifies For The World Cup’ – Milovan Rajevac

THIS IS TRENDING:   Partey Ready To Play Any Role To Help Black Stars