A video of a loud moan of alleged legon student from a hall has gone viral on social media, leaving netizens in shock.

In the video, loud moans could be heard from alleged legon student amidst sounds that suggest an energetic man was ‘pounding’ her mercilessly.

The video shows a lady filming the shock on her face to the moans that were coming from her roommate.

After capturing the surprising look on her face whilst covering her mouth in shock, she decided to turn the camera focus to the place the action was going on and it showed that it has happened on the bed opposite the one she was lying on.

However, a piece of cloth was used to cover the side of the bed which was against a wall, this then gives the partners in the act some but of privacy to implement their explicit desires.

The video has since shocked some social media users who have a lot to say. “Eiii so the boyfriend can’t get a hotel,” @kittypink909 wrote with @blacktigwe1 saying that “I swear I’m going to apply for this sukuu“.

Others are also trying hard to use the identity of the lady who filmed her facial expression to the loud moans to identify her roommate who may have been the one enjoying the sexual act in their room.

According reports, the sexual act was from a hall on the campus of University of Ghana, Legon. @angie_eyram wrote, “now everyone on campus will know who is being knacked because of her friends face. Las las everybody go dey fine sha“.

Watch the video below.

Ghanaian Couple Get Stuck While Enjoying Hot S3x In Lake Bosomtwe; Watch As They Cry And Beg For Forgiveness From The gods 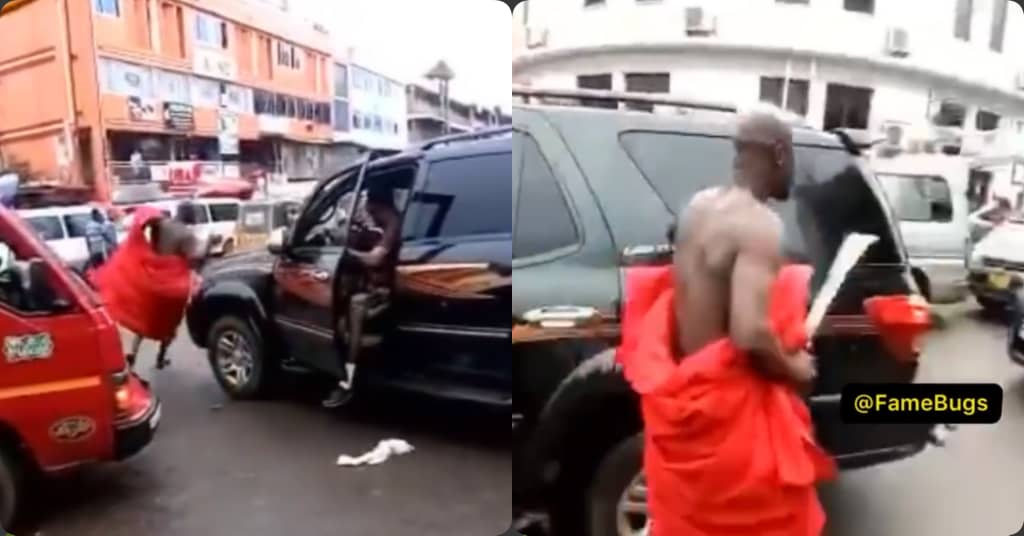 Information gathered by GhArticles.com and video sighted online has a young man attacked another man for snatching his wife.

A rare scene occurred in Kumasi, Adum, after an angry man attacked another man in traffic.

According to an account by eyewitnesses, the man in cloth attacked another man driving a V8 vehicle over claims of going after his wife.

Police later showed up to arrest him for pulling out the cutlass.

He was handcuffed and taken to a police station.

READ ALSO:   'I Send My N*des To Appreciate A Samsung A20 And Ghc50 gift’ – Akua Saucy, Lady Whose Nudes [email protected] Finally Speaks

So NPP Gov’t Can Bring Down Twene Jonas But Can’t Fix The Country; Twitter Users Descend On Hopeson Adorye For Exposing Twene Jonas ‘Hideout’ In US 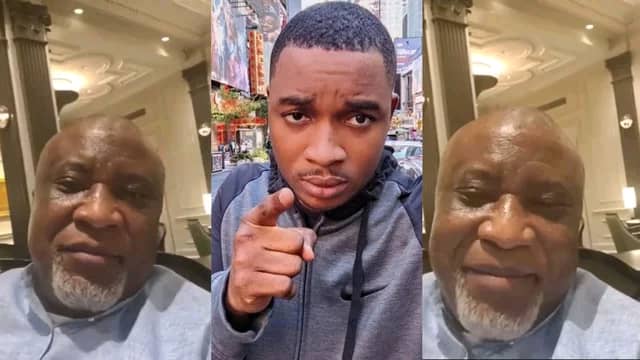 Some angry Ghanaians on Twitter have descended on Ghanaian politician and a member of the ruling party NPP, Hopeson Adorye following his exposure of Twene Jonas ‘hideout’ in US.

Mr Hopeson Adorye, was spotted in a video giving progress report on social media sensation, Jonas, and why he is currently ‘missing’ online.

In a self-recorded video sighted on Instagram, Hopeson Adorye indicated that he was currently in the USA on a mission concerning him.

The New Patriotic Party (NPP) stalwart indicated that he went to Jonas’ place of work where he works as a car park attendant.

According to Adorye, the Glass Nkoaa singer had been fired by his employers because they discovered he was working with fake documents.

He went on to add that the internet sensation had been taken in by a pastor who was allowing the outspoken Ghanaian ‘perch’ in his hall.

Hopeson Adorye added that he was currently in hiding following his unemployment, and was afraid to go home.

However, Twene Jonas made a post on social media, following claims that he had lost his job in the USA among other things.

In a Facebook post seen by GhArticles.com, Twene Jonas indicated that he was still enjoying himself in his “heaven om earth”.

The “Hw3 fom” crooner was seen in a photo flaunting an iPhone believed to be the latest model of the flagship phone which was released some days ago.

He was seen drinking what looked like juice he had ordered from a restaurant while flaunting the mobile phone.

After posting the photo, Twene Jonas captioned it:

“I attribute my success to this: I never gave up or took any excuse. I’m experiencing my new iphone 13 pro max! Life is good in Heaven on Earth Didi free smoothie Glass Nkoaa Hw3 fomm We run the city” Twene Jonas’ post follows some claims that were made yesterday by New Patriotic Party (NPP) stalwart, Hopeson Adorye.

Meanwhile, on Twitter Ghanaians have thrown in their support for Twene Jonas while descending on the NPP government.

Others also descended heavily on the MP for wasting money to charter flight to the US just to search for Twene Jonas and expose him.

The Outspoken Ghanaian vlogger and social commentator has become a target for Ghanaian politicians and leaders because of the way he addresses issues in the country with insults.

Well, Twene Jonas has won the hearts of most Ghanaian youth since he speaks the truth and facts while fighting for a better Ghana.

The Nana Addo led government has succeeded in bringing Twene Jonas down. Instead of fixing the country, they’re focusing on covering their bad deeds. Kwame Nkrumah Ghana paaa nie 😭😪

So Nana Addo use our taxpayers monies Go rent Private jet 🛩15 Eros per hour take Hopeson Adorye & Enerst Owusu bempah to go look for Twene Jonas in US just bcus he is giving his government pressure to do right things! Wat a shithole I now understand Donald Trump 😛

There are necessary issues which should be discussed and fixed but you leaders ain’t doing anything bout' that. You have the time to create an agenda to bring Twene Jonas down. Like a country which doesn’t belong to you. Y’all clowns !!!

Hopeson Adorye, i regret voting for you at kpone katamanso and i bless God you never won, i must tell you, trying tobring Twene Jonas down is bringing NPP down, remember we are all watching, sia, what wrong did he do, the bad roads in Ghana sef u fix finish? panin paa s3 no sense

They want him deported still he hasn't given up . They want him jobless now he is getting jobs through music and YouTube . They want him infamous but he is always getting famous everyday. Why always Twene Jonas?Because man has been uncovering their wickedness.Hw3 fom! Glass nkoaa

A grown man takes an airplane and comes to America to look for Twene Jonas so he can make a video about the guy. So bibinii kwraaa bɛɛyɛɛ dɛn wo wiase? Oh God!

Whether Twene Jonas sleeps on the streets or works as messenger in the USA he speaks the facts & true state of the Ghana. He's more courageous than most politicians in Ghana. pic.twitter.com/z8p6iSyvxW

READ ALSO:   'He Did Not Like Me' Baba Rahman Explains Shocking Reason Why He Left Chelsea
Continue Reading