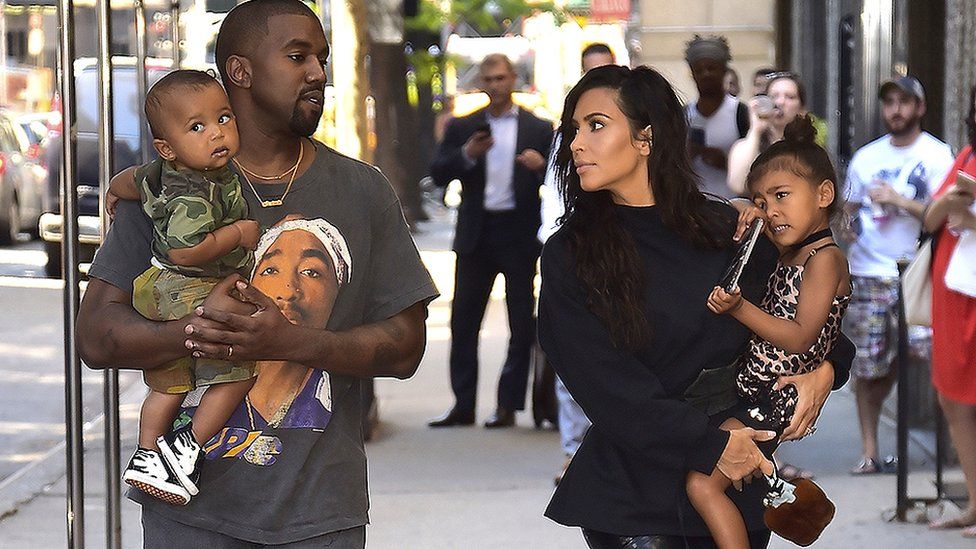 Kim Kardashian West and her ex-hubby Kanye took a little family trip together, for the kids, of course. This level of co-parenting is something the Kardashians can pull off.

Taking their four babies, North, Saint, Chicago and Psalm, to Asian Art Museum in San Francisco on 17 July 2021, Kim and Kanye put their differences aside for just a little.

The insider also said that the kids seemed very excited to be on a trip with Kim and Kanye and that the exhibition was a winner, as reported by Geo News.

“They were excited to be there, and everyone seemed to be getting along great between Kim and Kanye,” the source said.

“They were there for the kids as the museum is a very family friendly environment, and this specific exhibit brings out the childlike wonder in us all. By all accounts they were gracious, appreciative, and had a great time!”

Kanye West’s appeared during the listening as a lone figure clad in reddish-orange which walked slowly across the floor of the Mercedes-Benz Stadium, with the words “We gonna be OK, we gonna be OK” intoning repeatedly over swelling organ chords in a sonic blast.

A haze of smoke pumped from machines stationed around the stadium floor, making the tiny figure even more difficult to discern.

As the venue lights dropped, a dim white light shone on Kanye West – who sometimes paced in a circle, sometimes trotted a few steps – as songs unfurled around him, the light contracting and expanding in various shapes.

Kanye West at his album listening

And about 48 minutes later, he was gone.

On Thursday night in downtown Atlanta, West presented the official unveiling of “Donda,” his long-awaited, oft-delayed 10th album, to a crowd of about 42,000 – a sellout for the event’s configuration. The album is slated for release today.

Some of the big names who attended the album’s premiere included Rick Ross, 2Chainz, Khloe Kardashian and the rapper’s estranged wife Kim Kardashian West, who showed up with their kids.

As expected, the now Christian rapper expectedly arrived late to his own party. the listening party was also streamed live on Apple Music.

Fans, who paid $20-$100 to attend, might have expected some semblance of excitement but the greatest surprise of the night was when the final song of the album played. The song which features Jay-Z received a lot of applauds and praise.

On social media, the song was lauded for Jay-Z’s verse that included “This might be the return of the throne,” a nod toward the tandem’s 2011 album “Watch the Throne,” which earned a Grammy nomination.

Kanye’s album is named after his mother, Donda, who died in 2007 at age 58 and is present on the album in a recorded speech introducing a song.

West’s last release, 2019’s “Jesus is King,” marked a stylistic shift for the mercurial rapper, who stocked it with church organs and choirs and lyrics that interpolated Bible verses and Christian hymns.

A few songs from “Donda” indicated West might have returned to that motif with lyrics about “snakes and money pits” and “the holy fountain, holy water.”

The song, “God Breathed on This,” which West released earlier in the week, repeated the title in between verses obscured by Auto-Tune before shifting into choral sounds. And, in a callback to his September claim that he is “the new Moses,” one thumping song continually referenced his preferred title.

But any religious bent was occasional, as most of the songs blended into a pastiche of distorted sound with no true delineation where one stopped and another started. Heavy piano chords banged repeatedly over one track, while fuzzy guitar clamored on another.

Several tunes included spoken word segues, including one from poet Gwendolyn Brooks’ “Speech to the Young: Speech to the Progress-Toward (Among Them Nora and Henry III).” (“Even if you are not ready for day, it cannot always be night.”)

Through it all, West occasionally stopped to raise his hands overhead or pitch forward in a kneeling stance. It appeared that his roaming the stadium floor had no purpose.

Except, perhaps, in his own mind.

Kanye West at his album listening

A number of Ghanaian artistes have just touched down in the United Kingdom ahead of the annual UK Party in The Park event slated for this weekend.

The Ghanaian team made up of Sore crooner Yaw Tog, Kweku Flick, Amerado, Sefa, DJ Mensah, Camidoh, Mr Drew and Kofi Jamar, were seen checking out of the airport in some photos and videos sighted by GhArticles on Instagram.

The crew from Ghana was given VVIP treatment as sleek Mercedes Benz cars were awaiting their arrival to take them to their hotel.

The photos showed ‘Team Ghana’ in high spirits as they geared up to thrill their fans in the United Kingdom.

Below is a video of Ghanaian artistes at the UK Airport 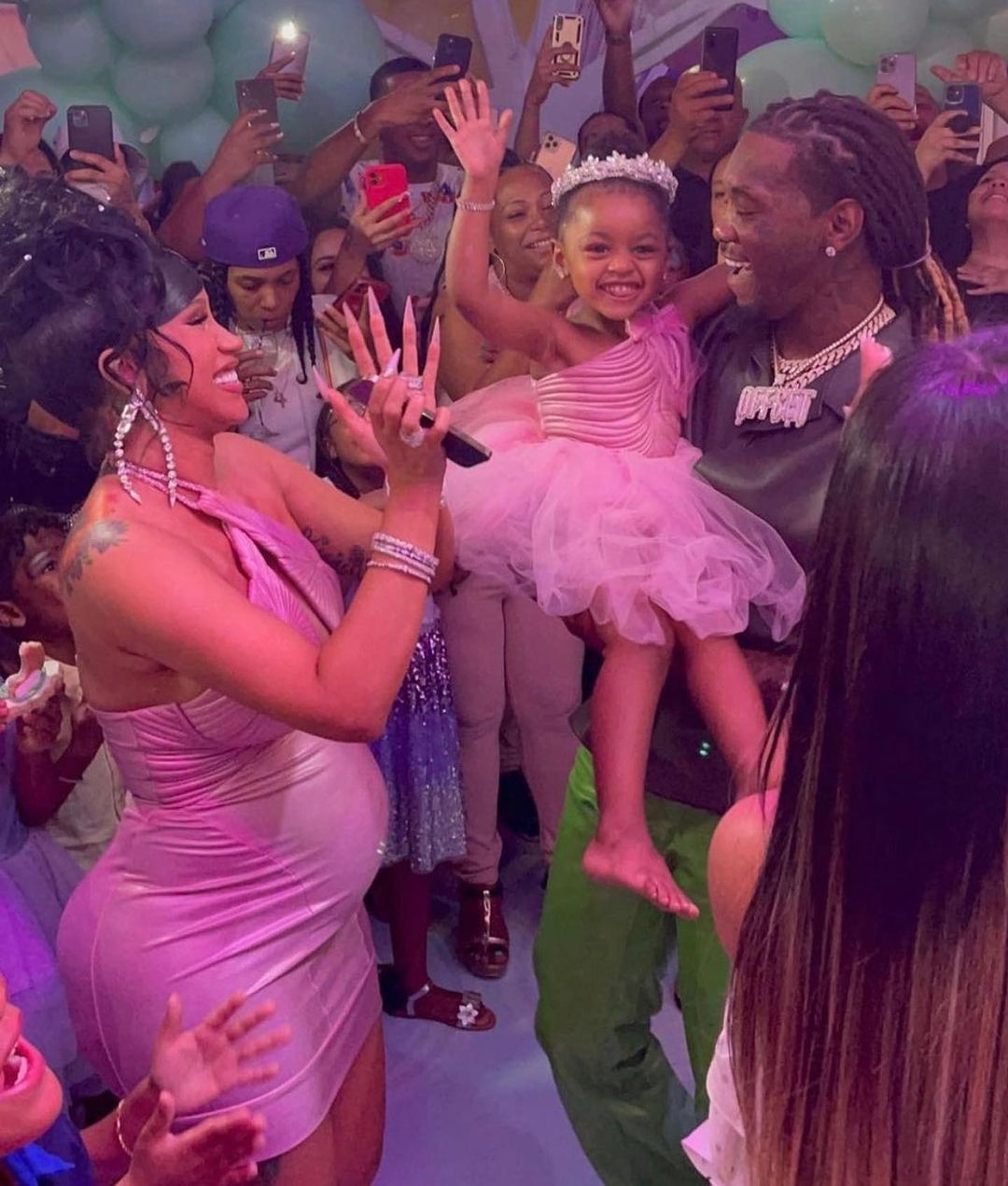 Star couple Cardi B and Offset has gifted their daughter a once in a lifetime birthday that she may never forget.

Kulture Kiari turned three years old on July 11 and got the most extravagant princess birthday party there is with friends and family invited to celebrate.

In videos shared by Cardi on her Instagram Stories, one could spot the little Kulture, dressed in pink, riding on a chariot as they went to the venue, and on arrival, she got into the ‘castle’ on top of a pony with daddy’s help. At the entrance, a huge balloon arch welcomed them that went all the way inside and, accompanied by her parents, Kulture was received by fairly princesses.

There was everything inside the building, from a nice club setting to children games, princess carriages, nice dining set for close family and more, which Kulture seemed to enjoy. Her cake was something from a movie with six tiers and resembling a princess carriage.