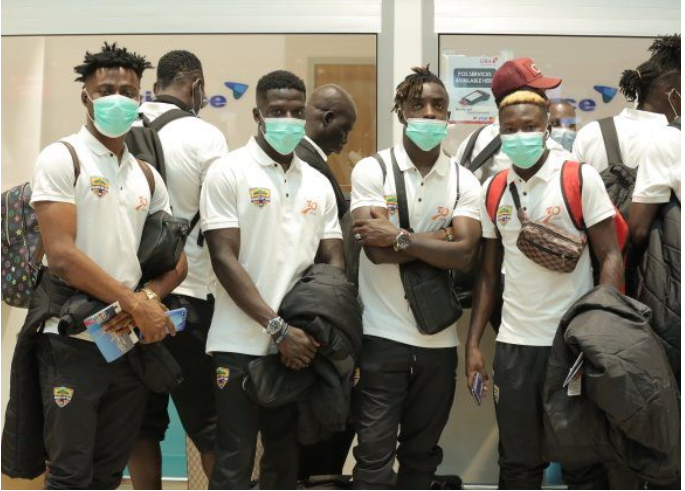 The 24 players of Hearts of Oak, together with members of their technical team, have touched down at the Mohammed V International Airport, ahead of the second leg of their CAF Champions League encounter.

Hearts, who made the trip to Morocco by making a transit in the Gulf state of Dubai, will be looking to complete the job they started in Accra.

In the first leg, Hearts beat Wydad by a single goal, to gain a slight advantage, and despite their first-leg win, they recognise the challenge ahead.

THIS IS TRENDING:   Chelsea Dominate UEFA 2021 Awards As Jorginho Named Player Of The Year

“If you were privileged to interview one of the WAC players, they will have certified that ‘yes, I’m playing with one of the biggest clubs in Africa’. So we going there I know it’s going to be tough,” Robert Addo said to Joy Sports.

Touchdown in Casablanca.
Shots of our arrival after a brief transit in Dubai.
Will keep you updated.
Phooooobiiiaaaaa#AHOSC#PositiveEnergy#CAFChampionsLeague#PhobiaToTheWorld. pic.twitter.com/5d05ralC4M

Nonetheless, Hearts have had their difficulties somewhat lessened by CAF, as the confederation directed for the game to be played behind closed doors.

Meaning, the 67,000 capacity stadium will have only the media, players and staff of the two clubs.

The game will be played on October 24.

THIS IS TRENDING:   The GOAT Messi Makes PSG Debut In 2-0 Win As Mbappe Scores Brace
The Black Stars booked their place at the quadrennial tournament on away goals following a 1-1 aggregate score against West African rivals Nigeria in March.
“I shall surely be in Qatar but maybe a pundit or let’s see,” Gyan added.

THIS IS TRENDING:   2022 WCQ: Fear In Ghanaians Eyes As Black Stars Set To Face A Big Team In Play-offs; Find Out