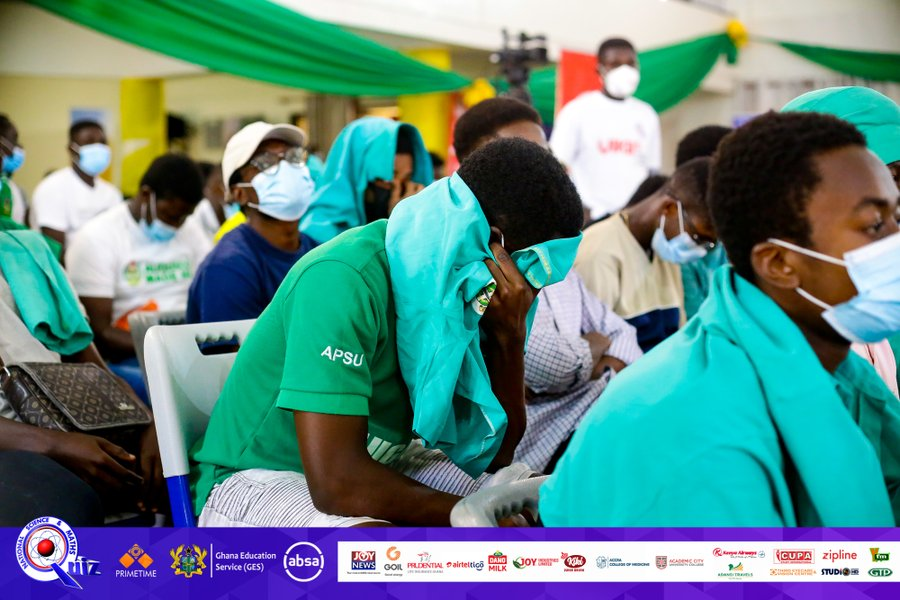 The level of competition that characterised the second quarter-final competition turned out to be intriguing as the NSMQ favourite was kicked out of the competition.

Augusco were in a clear lead in the second round when they scored 35 points ahead of Chemu with only a three-point margin.

Supporters of both schools were virtually sitting on pins and needles as the slightest mistake by any of the sides could deny one the bragging rights, but Chemu SHS stunned their close contenders when they answered the last riddle correctly.

The keenly contested race entered the ‘Problem of the Day’ round but unfortunately, all the schools recorded low marks, denying them any chance of winning the Prudential Life NSMQ Star award.

Yes! The competition was full of surprises and Chemu made it count in an incredible manner from Round 4 through to the last round.

It took the last riddle to separate the Chemu men from the ‘loud’ Augusco boys who were keen on carrying the day.

Augusco tried but it was just an unlucky day for them.

At the end of the contest, Chemu SHS accumulated 47 points after their witty display. Augusco managed 44 points while Kanton SHS scored 30 points.

It is now time for Augusco to row back home after their humiliating defeat because their chant of “action nkotsee” could not land them any honour.

THIS IS TRENDING:   Find Shelter As We Engage Authorities Over Your Evacuation - Govt Urges Ghanaians In Ukraine

You can imagine the moment of emotions that greeted the aftermath of the competition; and already, St. Augustine’s College is being trolled on Twitter for that painful loss.

In Accra there is a lagoon named Chemu, thus, part of the trolls is a reference to Augusco having fallen into the Chemu Lagoon.

Chemu SHS is likely to meet St. Peter’s SHS and Presec-Legon in the semis.

FixTheCountry Movement To Demonstrate Over 2022 Budget On Nov. 26

Successful Applicants For Police Recruitment To Be Examined Today

THIS IS TRENDING:   Konongo Odumase SHS Murder Suspects To Appear In Court Today

THIS IS TRENDING:   ECG Increase Charges From Today! - REPORT

THIS IS TRENDING:   School Placement For JHS Set To Commence On Nov. 29 - GES