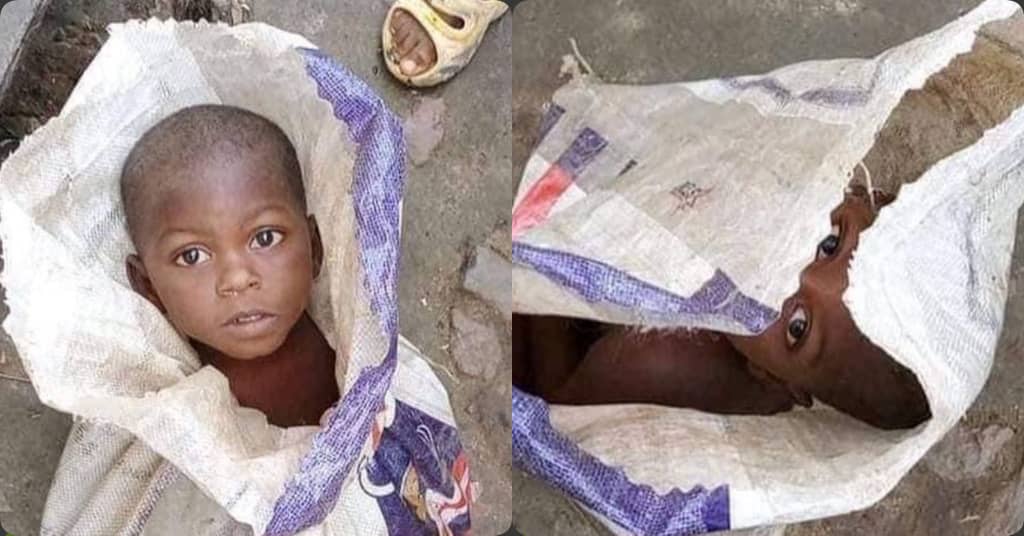 Poverty is a curse! Poverty can make a human lose his or her senses and do anything for money.

Poverty has forced a man to do the unthinkable thing as news gathered by GhArticles.com indicates that, this unidentified father out of frustration decided to sell of his 8 children for money.

A Nigerian lady on Twitter shared photos of a small boy wrapped in a rice bag.

Giving details of what happened, she said the man wrapped his 3-year-old son in a rice bag purposely to go and sell him.

When the man was caught, he explained he has 8 children and he is unable to provide money for food.

READ ALSO:   Berla Mundi Sparks Twitter War With Controversial Question On 'S3x Before Or After Marriage'

So he decided to sell one of them in order to get money to take care of the rest.

The witness added that the man was arrested by the police and he has been detained.

This incident happened in Nigeria.

Swipe to see the photos below;

Bawumia Gets Accommodation for Teenage Mom in School with her 10-month-old Son; She Speaks in Video

Though there is the perception that she is not compatible with her husband, a Nigerian prayer warrior says she does not regret marrying her fetish priest husband.

Her decision was not based on love or money, but the simple logic that she was appointed by the gods to be his wife, she told BBC pidgin.

In the interview, she stated that she was a single mother-of-four prior to her marriage but her husband accepted her in good faith.

Her decision, she said, drew mockery from society because she “was a serious church member, a prayer warrior and even part of the Jericho destroyers in church.”

She narrated how it all happened:

I used to visit him at his shrine and one day, he told me I have been appointed to be his wife and take care of him during old age. At that same time, pastors had already told me I had been chosen spiritually so I knew he was saying the truth.

When I told my mother, she said no I won’t marry him. So I went out and began to reason. And I remembered that when I was small, I had a dream where I was dressed like a Queen (Lolo).

I was like, maybe this is the dream coming to pass. So I was just calm although my mother was not happy with me then.

I am not scared of the work because even when I was in church, people used to call be ‘eze nwani’, queen.

I told my friends about it so when they heard I married a native doctor, they were laughing that after all my church things, I married Chief priest.

She continued that during her church days, she had a negative perception about native doctors and shrines, but following her marriage, she has realised it is a religion no different from Christianity.

According to her, a number of pastors have entered their den for spiritual assistance, hence she believes there is power in the deity.

After eight years in the marriage, she said she has never had the urge to turn back, especially as she has been assured to be a great woman.

Many people, even my friends are happy with me now because I’m doing well. My name is Lolo Ebelechukwu Chukwu Obi and I am proudly the wife of Chiefpriest, Idemili cultural center Agulu.

Nigeria said on Wednesday it expects to end its ban on Twitter in a “few more days”, raising hopes among users eager to return to the social media platform three months after the suspension took effect.

The ban, announced in June, has hurt Nigerian businesses and drawn widespread condemnation for its damaging effect on freedom of expression and the ease of doing business in Africa’s most populous nation.

But Information Minister Lai Mohammed told a post-cabinet media briefing the government was aware of the anxiety the ban had created among Nigerians.

“If the operation has been suspended for about 100 days now, I can tell you that we’re just actually talking about a few, just a few more days now,” Mohammed said without giving a time frame.

When pressed further, Mohammed said authorities and Twitter officials had to “dot the I’s and cross the T’s” before reaching a final agreement.

“It’s just going to be very, very soon, just take my word for that,” he said.

The government suspended Twitter after it removed a post from President Muhammadu Buhari that threatened to punish regional secessionists.

Last month, Mohammed told Reuters the Twitter ban would be removed before the end of this year, adding that the government was awaiting a response on three final requests made of the social media platform.

The ban is just one area of concern for free speech advocates. Nigeria dropped five spots, to 120, in the 2021 World Press Freedom Index compiled by Reporters Without Borders, which described Nigeria as one of the most dangerous and difficult West Africa countries for journalists. 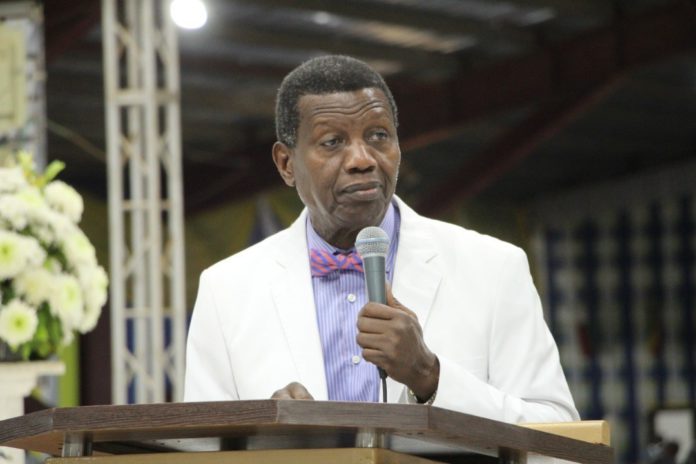 The General Overseer of The Redeemed Christian church of God, Pastor E.A Adeboye, has reacted to the growing number of ‘transgenders’ in the world.

Pastor Adeboye, in a post shared on his Facebook page, stated that God is not the author of confusion and that in the time of creation, God created humans in female and male gender yet some people have decided to change their gender as if God did not know what he was doing. He stated that God doesn’t make mistakes.

“Our God is the God of distinction; He is not an author of confusion. A man chooses to be confused when he does not want to do the right thing as ordered by God and so pretends that he does not know what God wants from him. When God creates, He does so with precision and purpose. He created lights for a purpose and darkness for another. God commanded:

“And let there be lights in the firmament of the heaven to divide the day from the night; and let them be for signs, and for seasons, and for days, and years.

“The God of order is that God of distinction. When He wanted to create man, for example, the Bible says:

“God, in His infinite wisdom, created mankind as male and female, yet some people feel the need to change their gender as though He did not know what He was doing when He created them! God does not make mistakes.

“Our God is the perfect God of distinction. He created the day for work and the night to rest. If for any reason we do not rest in one night, the following day should compensate for the loss of rest. Failure to observe rest produces stress, sickness and ultimately death. Little wonder life expectancy in the last 50 years has been on the decline. Achievements that should normally have taken 40 years to accomplish are realised in fewer than 30, at the price of dying earlier. The God of distinction says in His word:

“Be ye not unequally yoked together with unbelievers: for what fellowship hath righteousness with unrighteousness? And what communion hath light with darkness?

‘Wherefore come out from among them, and be ye separate, saith the Lord, and touch not the unclean thing; and I will receive you, and will be a Father unto you, and ye shall be my sons and daughters, saith the Lord Almighty.’

“A lot of people have mixed many profane things with the sacred. The God of distinction will never lower His standards. It is our duty to live up to His standards.

“Look into your life and see where you have compromised your values as a Christian. Repent and begin to walk in the path of righteousness again.”