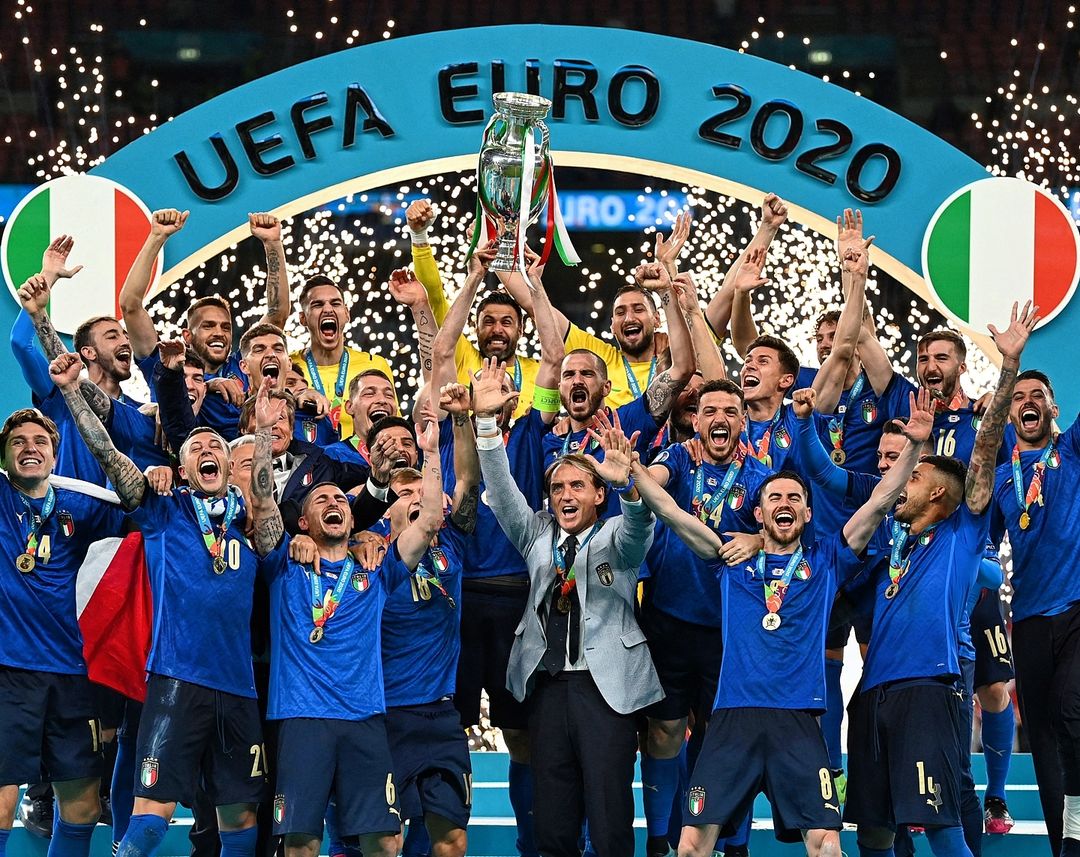 Italy are the new European champions following their 3-2 victory on penalties over England at Wembley Stadium.

Gianluigi Donnarumma saved Bukayo Saka and Jadon Sancho’s kicks to help the Azzurri win the silverware after playing a 1-1 draw after 120 minutes.

Read more: ‘He Did Not Like Me’ Baba Rahman Explains Shocking Reason Why He Left Chelsea

Manchester United left-back Luke Shaw opened the scoring for the Three Lions with a thunderous shot from close range after connecting with Kieran Trippier’s stunning cross.

England made more attacking runs in the early minutes of the encounter but they were wasteful with their final balls in spite of their opponents still finding their foot in the game. Raheem Sterling came close to adding to his side’s tally towards the end of the opening half but he was booked for offside. John Stones also made attempts but his header went slightly above goal as the proceeding headed towards halftime.

Leonardo Bonucci leveled parity for the Italians in the 67th minute after tapping in from close range with Marco Verratti responsible for the assist. The goal changed the texture of the game as the English team that was defending their early effort came out to fight for the ball. However, neither could produce any more goals despite the game stretching into the extra 30 minutes of fierce rivalry between both sides.

Italy made a last-minute effort at goal but the danger cleared off by England who appeared to have settled for shootouts due to the substitutions they made. 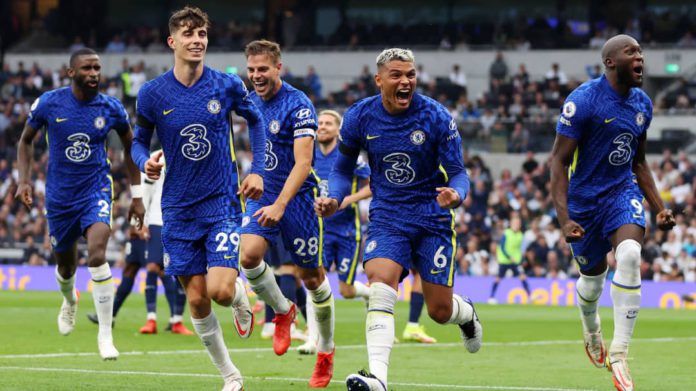 Chelsea moved joint top of the table – alongside Liverpool – following a 3-0 win at Tottenham where both teams paid tribute to the late Jimmy Greaves.

On the morning of the contest, it was announced that the legendary England striker had passed away at the age of 81 and it was fitting that supporters from two of his former clubs joined together to salute his genius ahead of kick-off.

It looked like there would be a goal-fest in his honour too as the sides made bright, attacking starts with Spurs, in particular, penning the Blues back with a high press from their front three.

However, the much-anticipated shoot-out pitting Harry Kane against Romelu Lukaku failed to materialise and the best opportunity of note in the first period came just past the half-hour when Heung-Min Son’s heavy touch allowed Kepa – in for the injured Edouard Mendy – to smother at his feet.

Chelsea came out with a renewed approach following the break and the introduction of N’Golo Kante proved key. Thomas Tuchel’s men took the lead four minutes after the restart when Thiago Silva thumped home a header from a left-wing corner before Kante doubled the advantage with a heavily deflected 25-yard strike soon after.

Spurs offered little to suggest they could launch a realistic recovery and in added time Toni Rudiger put the seal on what is a sixth successive away win in London derbies for the first time in their history.

Chelsea will now switch focus to an EFL home clash with Aston Villa on Wednesday prior to hosting Man City in a mouth-watering league match on Saturday.

Spurs visit Wolves in the EFL Cup before visiting Arsenal in the North London derby on Sunday. Liverpool remain unbeaten in the Premier League this season after Sadio Mane scored his 100th goal for the club in a victory against Crystal Palace.

Jurgen Klopp’s side created numerous chances against a resilient Palace before Mane pounced on a rebound at the back post in the first half.

Mohamed Salah doubled their lead with just over 10 minutes remaining when he smashed home a flick-on from a corner, before Naby Keita’s late curling strike made it 3-0.

Liverpool were wasteful in the first half as Diogo Jota fired over the bar from a few yards out in a glorious position, while Thiago and Jordan Henderson were also denied by keeper Vicente Guaita.

Palace had started brightly – hitting the post twice in as many minutes as Liverpool failed to clear their lines in the box – but the hosts’ persistence eventually paid off.

In the end it was a comfortable victory that capped a good week for Liverpool at Anfield, following their dramatic 3-2 win over AC Milan in the Champions League on Wednesday.

And it means they go top of the table with four wins from their opening five games, while visitors Palace remain outside the top 10.

Mane was one of six changes to Klopp’s side from their win over AC Milan, and his return must have been an unpleasant sight for Palace fans.

Having scored twice against Palace on the final day of last season, Mane’s opener on Saturday made him the first player to net in nine consecutive league matches against a single opponent.

It took his total to 13 against Palace in the Premier League – the most anyone has scored against them – and was the perfect way to notch up his 100th goal in all competitions for Liverpool.

Palace had attacking threat of their own from Wilfried Zaha – making his 250th Premier League appearance – but he was dealt with by the physicality of Fabinho and debutant Ibrahima Konate.

And while Palace continue to adapt and learn under new boss Patrick Vieira, they were given a humbling reminder of the ruthlessness of Liverpool’s attacking quality. 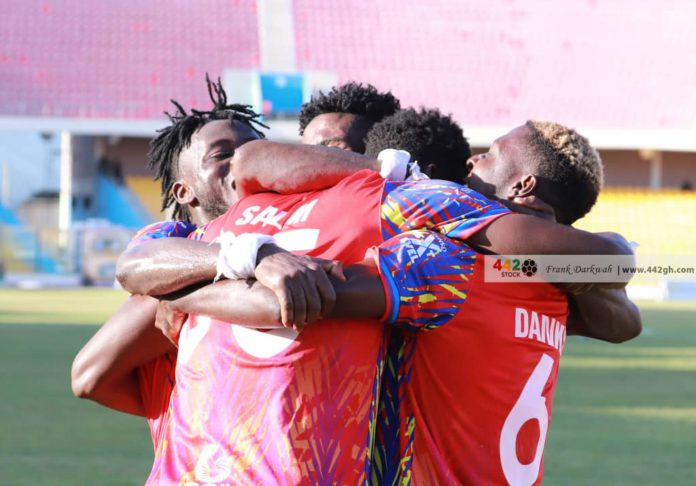 Kofi Kordzi and Salim Adams’ second-half goals were enough as Hearts of Oak seal a 2-0 victory over CL Kamsar in the Caf Champions League preliminary game.

The Phobians needed a result in the one-legged tie at the Accra Sports Stadium to qualify to the next round of the competition.

The Ghana Premier League champions got the job done with the next round still left to be played to secure a place in the group stages of the competition.

The Guinean club actually started the game brightly and created some opportunities, even finding the net at some point but the goal was ruled out due to an infringement.

Hearts of Oak, however, slowly grew into the tie and dominated possession till the end of the first half.

In the second half, the Phobians kept the pressure up whilst CL Kamsar started some time-wasting tactics.

Fortunately for the hosts, Kofi Kordzi, who came on as a substitute, made a huge mark. After starting the move which led to a close-range free-kick, the striker blasted the ball into the net from the set-piece, delighting the technical team.

During injury time, Salim Adams, who was also a substitute, sealed the result with a power driver from the edge of the box.

Following the results, Hearts of Oak will now battle out with Moroccan giants Wydad Casablanca in the next round of the 2021/22 CAF Champions League preliminary round on October 20.