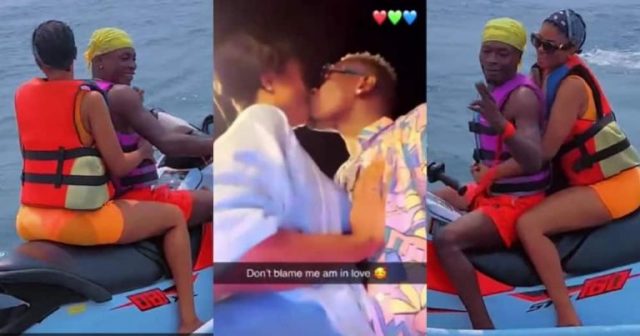 It has officially been confirmed that Shatta Wale and Elfreda are no more a love item.

These two love birds did not last for 6 months in their relationship and broke up a few months ago. They planned to keep it out of the public space but we broke the news and it’s viral.

In a new development, Elfreda has deleted all videos of Shatta Wale on her Instagram Page and unfollowed the dancehall musician.

This comes after news broke that they are no more together.

A quick search on Shatta Wale’s page also reveals that the last time he posted the lady was on her birthday and he to has unfollowed her.

Shatta Wale took the liberty to explain why his relationship with Elfreda ended in golden tears. He claims Elfreda is insecure and keeps going through his phone to find fault with him.

The dancehall musician added that the young girl wants to control his life and does not obey his command.

“A woman that wants to tell you how to live your life is not marriage material but a woman that supports all your bullsh*t is the one we call wife,” he ranted.

“A woman without a vision either stays with family or friends to tell her what to do next…careful when woman say she love you, most of them are liars and faultfinders,”

Fans are asking now that it has ended, is Shatta Wale going to take back the Range Rover he allegedly bought for her some months back.

Related Topics:ElfredaGhArticlesgharticles.comshatta wale
Up Next

‘Odartey Lamptey Has Been Through A Lot; I Want To Read His Book’ – Sarkodie