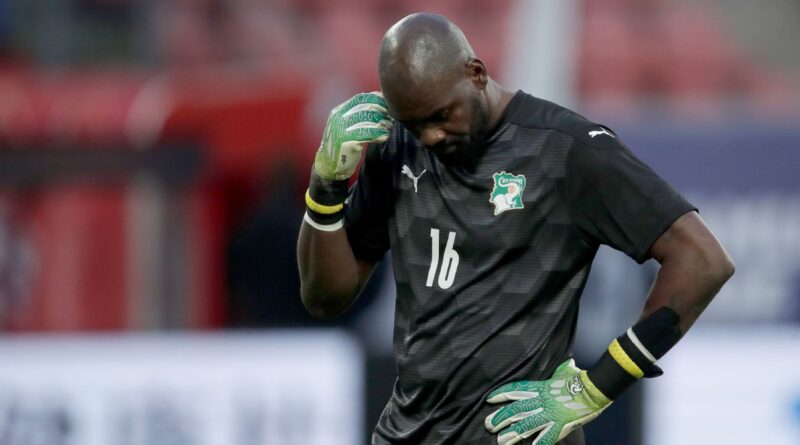 Africa Cup of Nations title hopefuls Ivory Coast were dealt a blow on the eve of their first game at the tournament as first-choice goalkeeper Sylvain Gbohouo was ruled out for doping.

The Ivorian Football Federation revealed news of the FIFA-imposed ban on Tuesday, 24 hours before the Elephants play Equatorial Guinea in their opening group game in the Cameroonian city of Douala.

“FIFA can confirm that its Disciplinary Committee has provisionally suspended Sylvain Gbohouo on the grounds of doping,” a spokesperson for football’s world governing body told AFP.

The 33-year-old started all six matches in the group stage of African qualifying for this year’s World Cup, including most recently a decisive 1-0 defeat in Cameroon in November.

THIS IS TRENDING:   #AFCON2021: VAR To Be Used Throughout Tournament In Cameroon

National team coach Patrice Beaumelle was notified on 26 December that Gbohouo had tested positive for trimetazidine, a heart medication that the World Anti-Doping Agency categorises as a stimulant.

Gbohouo had been named in Ivory Coast’s squad for the tournament three days earlier and was subsequently provisionally suspended.

His ban has now been confirmed by Fifa and Gbohouo, who plays his club football in Ethiopia for Wolkite City, has appealed against the ruling.

“We had hope of getting a favourable response from Fifa but yesterday I learned that they were upholding their decision,” Beaumelle said.

Beaumelle added that the player, who was part of the 2015 Nations Cup-winning squad, was training alone, had lost weight and “is not sleeping”.

Ivory Coast are in Group E alongside holders Algeria, Sierra Leone and the Equatoguineans, with Badra Ali Sangare, Abdoul Karim Cisse and Ira Eliezer Tape their other three keepers in Cameroon.

AFCON 2021: Ghana Should Have Just Called Me – Kevin-Prince Boateng On Black Stars’ Defeat

THIS IS TRENDING:   Mbappe And Messi Inspire PSG To Champions League Rout