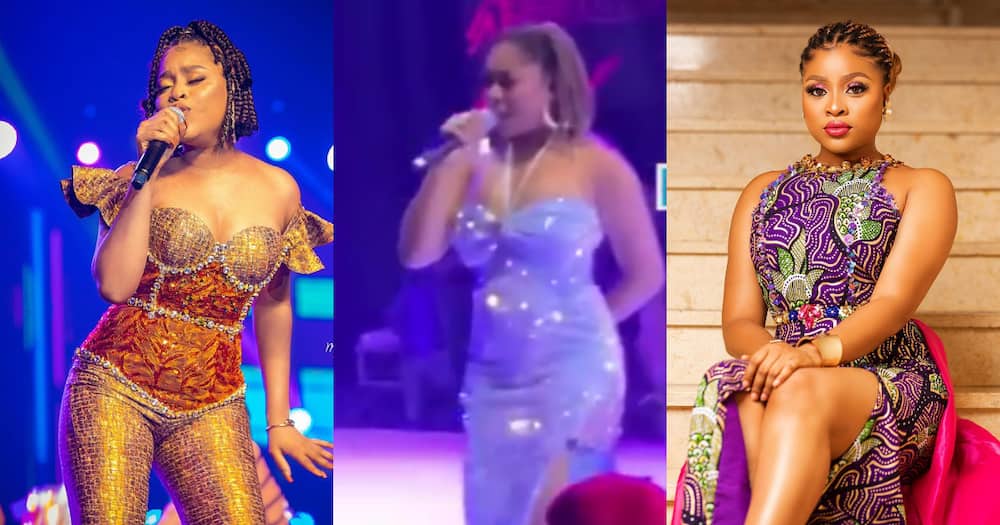 Award-winning singer Adina Thembi has been trending in the news in the past 24 hours.

The follows her performance at the Rhythms On The Runway fashion show on Saturday, December 6, 2021.

Adina appeared for her performance with a visible bump in front of her.

As previously reported in the news, the bump in front of Adina sparked gossip that the singer was pregnant.

But it has turned out the singer is not pregnant as fans had hoped for and even congratulated her.

Information gathered from Adina’s management indicates that Adina’s look was not pregnancy. It is rather a result of a medical condition.

According to our source, Adina recently suffered fibroid complications and had to undergo surgery to remove them.

THIS IS TRENDING:   I Rejected $200,000 Offer To Promote LGBTG+ In Ghana – Captain Smart Reveals

A video shared on Adina’s YouTube page shows her explaining her journey through the surgical procedure.

Adina explained that she suspects that her fibroid came up around 2014 but she did not take note of the little changes in her body.

She explained that there is a history of fibroid in her family. Her mother and sister have all had a fibroid removed before.

Even though Adina looked very slender at the time, one of the doctors at the Tema Women’s Hospital, Dr Yaa Owusu-Baah, revealed that the singer’s fibroid was like a 32-week pregnancy.

The surgery was successful after about four hours of work which according to the lead surgeon, Dr Jacob Amoatwo, saw them remove 16 different fibroids.

THIS IS TRENDING:   Teacher Kwadwo Reacts To Sacking From GES

Watch the video of Adina’s surgical procedure below:

In other news, Jackie Appiah has been involved in a hilarious situation.

The actress fell flat on the ground during a musical chair competition in a new video sighted online.

The actress displayed her playful side when she competed with another lady.

As it is done, they danced around the single chair with music being played in the background.

With so much alertness, the two ladies stumbled over each other in a bid to be the first to sit when the music stops.

HOT GOSSIP: Joyce Blessing In Fresh Trouble As Two of Her Children Are Allegedly Not For Her Husband

THIS IS TRENDING:   H0rny Lady Almost Breaks Kidi's Waist As She Storms Stage While He Performs In Kenya; Kidi Begs Her To Stop (Watch)

THIS IS TRENDING:   H0rny Lady Almost Breaks Kidi's Waist As She Storms Stage While He Performs In Kenya; Kidi Begs Her To Stop (Watch)

THIS IS TRENDING:   'She Ain't The One To Play With' - Offset Brags About Wife For Earning Third Diamond Single