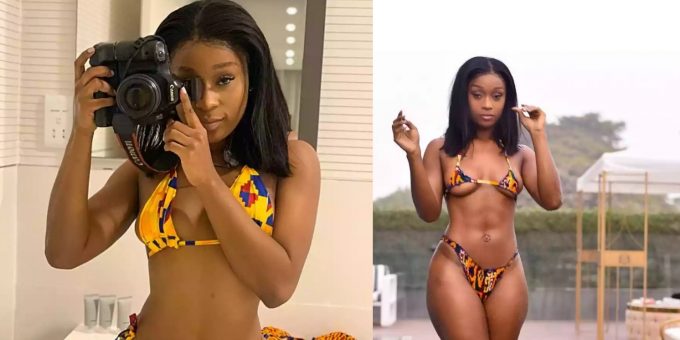 Ghanaian actress and video vixen, Efia Odo has descended heavily on Netizens who are trolling the Ghanaian blogger who was embarrassed during an audition on GHOne TV.

GhArticles.com earlier on reported that Bongo Ideas, a Ghanaian blogger who attended an audition at GHOne TV hosted by Serwaa Amihere, Bridget Otoo and Nana Aba Anamoah got embarrassed by the media personalities for trolling them on Twitter.

In a video posted on Nana Aba’s social media pages, it was revealed that the blogger had taken a swipe at all three of them including actress Lydia Forson.

Nana Aba asked him to be bold enough and tell her what he has been posting on Twitter.

The Ghanaian blogger said he needed to get the source of their allegations and he told him to check his phone.

The reluctant blogger quizzed why he should do that and he also refused to apologise.

This angered Nana Aba the more and asked him to walk out.

Following that, he took to Twitter to say he forgot what he had rehearsed earlier on before appearing for the judges.

The blogger then noted he has learnt his lessons. However, Bong Ideas has also alleged that he was attacked by a woman, dragged and thrown out of the studio.

He further added that, they have failed to add that to the story.

On social media, a lot people have trolled and slammed the blogger for his actions and failing to accept his mistakes and apologize during the audition when Nana Aba and co brought up the issue.

Reacting to the issue, Efia Odo has also slammed the social media Pharisees who feel very innocent of never trolling someone on social media before.

The brand influencer took to Twitter to say that “We are all hypocrites.” In other words, everyone has ever bullied someone online, Bongo Ideas is not the first person to do so.

“We are all hypocrites. Doing to others what we don’t want to be done to ourselves, smh. Do better!” she tweeted.

Her tweet garnered a lot reaction from social media users, as many of her fans agreed with her on the statement she made.

THIS IS TRENDING:   Pregnancy Is The Hardest Thing Ever To Get When You’re Ready - Princess Shyngle

Meanwhile, self-acclaimed King of Dancehall, Shatta Wale has called for the arrest of the young Ghanaian blogger popularly known as Bongo Idea by identified as Journalist Albert.

A lot of peeps are bashing him for what they describe as uncouth for and joining the tall list is Shatta Wale who has called for Albert to be sent to Ankaful Maximum Security Prisons to probably experience what he went through during his 10 days arrest.

Reacting to the development on social media, Shatta Wale posted a video of the encounter with the comment: “MR why should I … if I talk say school no go far, u ppl go talk nonsense ..Twitter educated ppl see ur fam oo… I swear this boy for go jail.

Kwadwo Sheldon Clash With Wendy Shay Over Definition Of Celebrity

THIS IS TRENDING:   Celebrity Beef: Kofi Jamar Clears Air On Viral Video Of Yaw Tog And Gyakie Ignoring Each Other

THIS IS TRENDING:   Teacher Kwadwo Dressed Like Warlord As He Storms GES Disciplinary Hearing (Video)