Ghana’s best legal brain and the most famous lawyer, Mr. Tsatsu Tsikata has come at the receiving end of enormous praise and commendation from the general Ghanaian public as he schools and lectures the supreme court judges on the election petition case during the 2nd day of pre-trial.

John Dramani Mahama and his legal team stormed the Supreme Court for the day two of the hearing of the petition.

The hearing began and the Lead Counsel for the Petitioner, Lawyer Tsatsu Tsikata raised 12 powerful questions seeking answers from the Chairperson of the 1st Respondent before the Court.

It was a heated debate when a Panel Judge demanded Tsatsu Tsikata to limit his direct address of Jean Mensa. Tsatsu Tsikata, however, argued that most questions can be answered by only a single person and that is Madam Jean Adukwei Mensah.

The Counsel also chided the EC for describing Mahama’s petition as irrelevant. He argues that, the substance of the petition can only be judged by the Court. 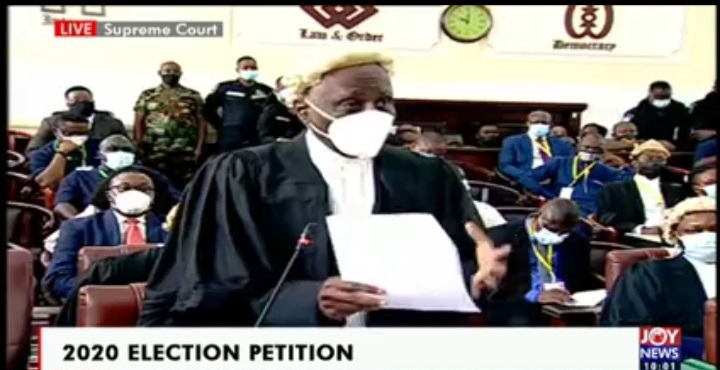 Check out the 12 strong questions from Mahama’s legal team to the EC;

1. Was the practice described in paragraph 1 herein followed in respect of the 7th December 2020 elections?

THIS IS TRENDING:   Cardi B Takes Offset Back Because She Misses His D*ck

READ ALSO: We May Be Forced To Go On Another Lockdown if COVID-19 Cases Continue to Increase – President Nana Akufo-Addo

4. How were results transmitted from the Regional Collation Centres to the Headquarters of 1st Respondent?

5. Did the National Communications Authority facilitate in any way, the transmission of the results to the Headquarters of the 1st Respondent?

6. When did Mrs. Jean Adukwei Mensa, the Chairperson of the 1st Respondent and the Returning Officer for the Presidential Election, first realized there were errors in figures she had announced in her Declaration of 9th December 2020?

7. How did Mrs. Jean Adukwei Mensa, the Chairperson of the 1st Respondent and the Returning Officer for the Presidential Election, get to realise there were errors in figures she had announced in her Declaration of 9th December 2020?

8. In respect of the purported “corrections” made to the figures in the Declaration of the 1st Respondent, was there any prior process of conferring with agents of the Presidential candidates?

THIS IS TRENDING:   Fight oh Fight! 'Clean Your Makeup, And Come Face Me Raw Like A Woman' - Mona Guuci Drops No Make-up Photo Dares Afia Schwarzeneger

9. Did Mrs. Jean Adukwei Mensa, the Chairperson of the 1st Respondent present Form 13 to all the agents of the Presidential Candidates to sign, and, if so, did all the agents sign?

READ ALSO: ‘I Have Cursed Mahama for Neglecting Me, He Will Never Become The President Again’ – Akua Donkor Spits Venom on Mahama

11. Did the 1st Respondent record any discrepancies which were occasioned by computational and mathematical errors in the course of the Collation of the Results?

Mr. Tsikata’s extraordinary performance today has attracted praise from Ghanaians on social media. Below are some of them;

What governments all over the world are doing after COVID in 2022.

One of the most important ways that societies intervene to buffer the adverse consequences of socioeconomic disadvantage is through the provision of social assistance. Social assistance refers to government programs that provide a minimum level of income support to individuals and households living in poverty.

When people talk about people receiving public assistance – food stamps, disability, unemployment payments, and other government help – they often have stereotypes and inaccurate perceptions of who those people are and what their lives are like.

This view of some people is affecting policy for the growing ranks of our nation’s poor, says a new report from a joint project from Save the Children and the Center for American Progress. The report compares the U.S. means of measuring economic opportunity and poverty with the experience of other countries, including five peer nations on the same income scale. It shows that people in many peer countries are given assistance as a matter of public policy, and these nations tend to view welfare programs as a short-term emergency measure.

Many countries like the U.S and spend significantly more taxpayer money on assistance than peer countries. After a few years of assistance, people on welfare in the U.S. have a much more difficult time finding jobs, according to the recent National Survey of Transitional Assistance Providers. These programs lend support either in the form of direct cash transfers or through a variety of in-kind benefits (e.g. food stamps and rent subsidies). Social assistance has been shown to strengthen the purchasing power of the poor and raise their material standards of living.

THIS IS TRENDING:   'Dogs Are Better Than Men' - Lady Says; Netizens React

However, the government does not provide these social assistance programs to ensure marginalized populations are treated fairly, the report says. In fact, U.S. policy determines participation by significant factors, such as the stigma associated with poverty.

Many social programs determine eligibility before a person’s need for support. They include the U.S. Earned Income Tax Credit, which provides an additional tax refund to working families. Similarly, these benefits are made available only to the poor, as with food stamps and Medicaid eligibility. The report finds positive signs.

THIS IS TRENDING:   GES Announces Closure of Basic School

Throughout the world, government assistance helps increase your odds of getting a job, incorporates receiving benefits (by lowering the barriers to receive), raises your wages, and reduces the chances of falling into poverty. This means people who receive the assistance are less likely to experience long-term poverty.

Some nations take a deliberate approach to the provision of social assistance because they view the social support system as integral to promoting social and economic mobility. In many cases, straight into the workforce programs and an expansion.

Access to jobs is crucial to moving families out of poverty. Unemployment and disability, for example, only benefit people when they work. A policy reform could make the social safety net more effective.

THIS IS TRENDING:   EC EXPOSED AGAIN! This Is How Jean Mensah Allegedly Tricked NDC Agents In The Strong Room Into Signing Fraudulent Results

THIS IS TRENDING:   EC EXPOSED AGAIN! This Is How Jean Mensah Allegedly Tricked NDC Agents In The Strong Room Into Signing Fraudulent Results