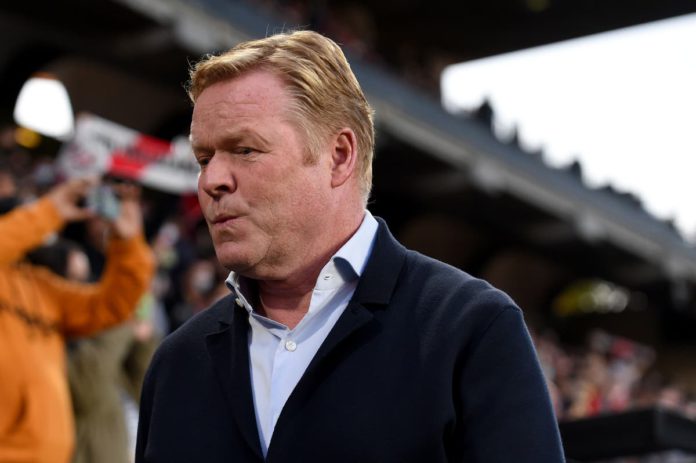 Ronald Koeman has been sacked as head coach of Barcelona after 14 months in charge at the Nou Camp.

Barca have picked up just 15 points from 10 games in La Liga and have already lost twice in the group stage of this season’s Champions League.

They are ninth in the table, six points adrift of the joint leaders after losing at Rayo Vallecano on Wednesday.

The loss was Barca’s third in their last four games and it followed defeat in Sunday’s Clasico to Real Madrid.

In a statement, the Spanish club said: “The president of the club, Joan Laporta, informed him [Koeman] of the decision after the defeat against Rayo Vallecano.

“Ronald Koeman will say goodbye to the squad on Thursday.”

The former Netherlands, Everton and Southampton boss, 58, could only guide the five-time European champions to third place in the league last season.

THIS IS TRENDING:   JUST IN: Dede Ayew And Jordan Ayew To Quit Black Stars After Afcon Woes

The Dutchman has not been helped by the club’s significant financial problems, which resulted in Lionel Messi’s exit and subsequent move to Paris St-Germain in August.

Barcelona were unable to spend any money on new signings in the summer, with Memphis Depay, Sergio Aguero and Eric Garcia arriving as free transfers and striker Luuk de Jong joining on loan from Sevilla.

“The team has lost balance in the squad, lost very effective players, which shows. In recent years other clubs have strengthened every season and we haven’t, which also shows.”

Club legend Xavi, the former Barca midfielder who is now manager of Qatari side Al Sadd, is one of the favourites to replace Koeman.

THIS IS TRENDING:   'We Sacrificed 7 Mad People To Win The U20 World Cup' - Joseph Langabel Makes Shocking Revelation(Watch)

It is the first time since September 1987 that Barca have lost three away games in a row without scoring – a run that saw English manager Terry Venables sacked.

Koeman won the Copa del Rey at the end of his first season but Barca finished behind Atletico Madrid and Real Madrid in La Liga with their lowest points tally since 2008.

The former Netherlands centre-back played for the Spanish club between 1989 and 1995, helping them to four league titles and scoring the winning goal in the 1992 European Cup final.

He was brought back to the club in August 2020 as head coach by former president Josep Maria Bartomeu.

Raphael Dwamena: Latest On Ghanaian Player Who Collapsed During Match

THIS IS TRENDING:   'We Sacrificed 7 Mad People To Win The U20 World Cup' - Joseph Langabel Makes Shocking Revelation(Watch)

THIS IS TRENDING:   Xavi Hernandez Unveiled As Barcelona Coach