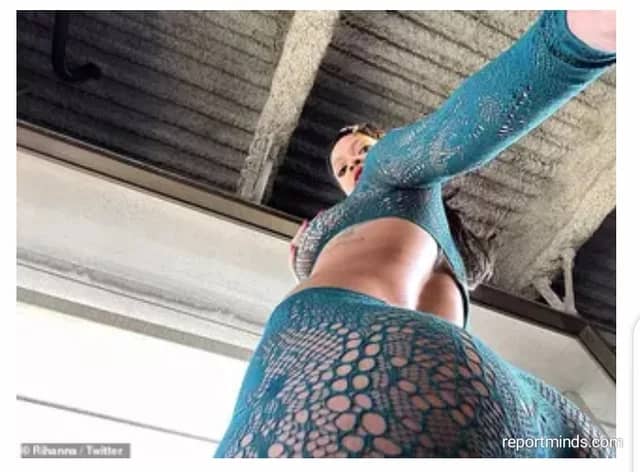 American singer, actress and businesswoman, Rihana served her fans with sultry snap of herself.

The 33-year-old singer recently woke her followers up with a very intimate look at her backside.

Rise n’ shine! “If you woke up late this is for you,” she teased in her caption, posted to both Instagram and Twitter.

Rihanna’s asymmetrical lace catsuit dubbed the ‘cold-hearted snake,’ for its serpentine silhouette in the front, showed off her back as well as her bum.

THIS IS TRENDING:   Will Smith Apologizes To The Academy And His Fellow Nominees For Slapping Chris Rock

She appeared to go undergarment free in the daring look, and clutched her top while taking the shot from a tilted angle.

The images appeared to be from a recent shoot as she had previously posted snaps of her laying horizontal in the garment.

Fans have been eagerly awaiting new music from the newly minted billionaire for five years, as her last album Anti came out in 2016.

THIS IS TRENDING:   Johnnie Hughes And Others Troll TD Jakes Over ‘Akufo-Addo Turning Ghana Completely Around’ Comment

Akufo-Addo’s Alleged Sidechic, Serwaa Broni Claims He Used National Security To Rob Her After She Rejected Him; Drops More Evidence

THIS IS TRENDING:   Listen To Kuami Eugene's Discouraging Message To Underground Artists (Watch)

THIS IS TRENDING:   Will Smith Apologizes To The Academy And His Fellow Nominees For Slapping Chris Rock

THIS IS TRENDING:   Shatta Wale, Medikal Cause Stir With ‘Fufu Eating Video’ After Court Trail [Watch]

THIS IS TRENDING:   Kwaw Kese Blast Hot Prayers For The Release Of Shatta Wale

THIS IS TRENDING:   Shatta Wale, Medikal Cause Stir With ‘Fufu Eating Video’ After Court Trail [Watch]

THIS IS TRENDING:   Kwaw Kese Blast Hot Prayers For The Release Of Shatta Wale