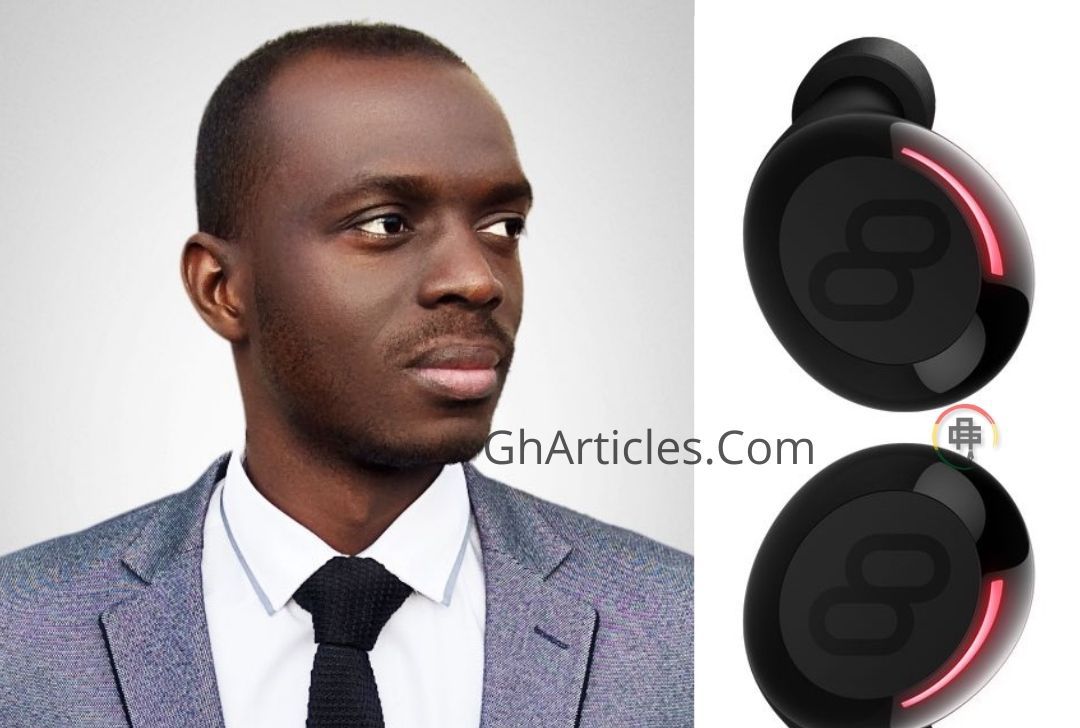 The wireless earbud is the latest trend in the communication world. And virtually all mobile phone brands are coming out with their version of earbuds.

One tech entrepreneur has added innovation to the earbuds economy with his own invention.

Danny Manu, a Ghanaian-British man, developed earbuds that auto-translate other languages. According to Keepthefaith, the earbuds can live translate over 40 languages.

The product, called Click, is said to be “the world’s first truly wireless earphones” with live voice translation supporting 40 languages.

The wireless Bluetooth headset works by pairing to a smartphone. The earbuds then automatically detect the language being spoken and provide a spoken translation within a sentence or two. Click does not require internet like similar inventions.

The device, which has been on the rise since its invention under the Mymanu brand, has won customers across Europe, U.S and Asia.

Manu tells Keepthefaith that the journey has been long and stressful, attributing his success to hard work and determination.

Manu built his business through self-financing. This was down to the challenges Black startups in the UK face in accessing capital or venture funding.

“Like all the other ethnic minority-run businesses within the UK, I had a hard time getting the funding and financial support from banks and government-funded programmes that I needed,” he said.

In the light of the above, Manu had to explore other means to raise funds for his startup. He used his personal savings, own sales and funds he raised from crowdfunding sites.

“If you truly believe in your product and ideas, you shouldn’t have too much trouble convincing other people to believe in them, too,” he said.

According to Keepthefaith, he raised over $5,000,000 on crowdfunding websites like Kickstarter and Indiegogo.

When COVID-19 struck, the Manchester business owner innovated in order not to go out of business. He saw a business opportunity in producing PPE and other safety equipment to help protect people in the Manchester area from the pandemic.

“I wanted to help my community and do some good, and Medybird was the perfect solution,” said Manu. “I saw how COVID 19 was affecting the BAME communities and my fellow local businesses here in Manchester – it was heartbreaking to watch.”

He established Medybird to go into the production of PPEs and other safety equipment and within weeks, he supplied much needed PPE and subsequently shipped out over 15 million PPE to countries in need.

For other aspiring entrepreneurs who want to venture into the tech space, Manu said “focus on your successes and believe in yourself.” He continued: “if you surround yourself with your accomplishments and don’t stop believing in your dreams, you’ll have a real chance.”

Instagram Is Offering Eligible Users Up To $10,000 To Use The Reels Feature

Just as the holiday season is approaching, people are always looking for ways to receive some extra money, and it looks like Instagram may have a solution.

The company is giving users an incentive to receive some extra cash by using their Reels feature. The Reels feature, which was introduced in August 2020, is similar to the popular application TikTok, where users can record and edit 15-second multi-clip videos with audio, effects, and new creative tools.

According to Tech Crunch, Instagram is dishing out bonuses up to $10,000 for creating Reels, a program that started in July. Maddy Corbin, who has 52,000 followers on Instagram, was recently offered up to $1,000 for Reels in a month. However, it doesn’t appear that all content creators are receiving the same payout amount. “I saw some people that had more followers than me, and they could only make $600,” Maddy told TechCrunch. She says that users with fewer followers were offered $800. “I wish I knew more on how that was generated. All I can think of is maybe it’s based off of past reels’ performance,” Maddy stated.

Instagram spoke with TechCrunch about the pricing difference in payouts stating, “We’re continuing to test payments as we roll out to more creators, and expect them to fluctuate while we’re still getting started. We’ve designed bonuses so that we can help as many creators as we can in a way that is achievable and drives meaningful earnings. Our goal is for bonuses to become more personalized over time.”

Although the program has been around, this month, Instagram kicked the bonus up a notch to keep up with TikTok, as the platform surpassed 1 billion monthly active users. Several competitor platforms like YouTube Shorts and Snapchat Spotlight have also introduced an incentivizing feature for users to post their short-form content on their apps instead of TikTok.

Now that we’ve given you the rundown about Instagram cashin’ folks out, here is how to see if your account qualifies! Users need to be at least 18 years old and meet the platform’s partner monetization policies, which are a bit vague. The policy states you must reside in an Eligible Country, Comply with our Community Guidelines and Content Monetization Policies. To see the complete list, head over to Facebook’s website.

Elon Musk and his tweets have been in the headlines this week, and it doesn’t appear that will change anytime soon.

Most recently, Tesla’s stock reportedly dropped by 4%, which puts it “on track to lose $42 billion in market value,” according to Forbes.

This occurred after he tweeted about not signing a deal with Hertz that’s been in talks for some time.

If any of this is based on Hertz, I’d like to emphasize that no contract has been signed yet.

Tesla has far more demand than production, therefore we will only sell cars to Hertz for the same margin as to consumers.

Hertz deal has zero effect on our economics.

The tweet read, in part, “If any of this is based on Hertz, I’d like to emphasize that no contract has been signed yet.” Emphasizing the demand to production ratio, he wrote, “Tesla has far more demand than production, therefore we will only sell cars to Hertz for the same margin as to consumers. Hertz deal has zero effect on our economics.”

According to reports, though Musk tweeted no contract has been signed, Tesla has already provided Hertz with cars for their rental fleet.

“Deliveries of the Teslas already have started. We are seeing very strong early demand for Teslas in our rental fleet, which reflects market demand for Tesla vehicles,” Lauren Luster, director of communications at Hertz, stated.

According to CNBC, Luster didn’t give the specific of the agreement. But Luster did say that Hertz is still “on plan with its announcement last week to offer 100,000 Tesla electric vehicles by the end of 2022.”

This isn’t the first Tesla or Musk tweet to make headlines. In response to an article that stated 2% of Musk’s income would help solve world hunger, Musk tweeted that he would be open to selling his Tesla stock.

“If WFP can describe on this Twitter thread exactly how $6B will solve world hunger, I will sell Tesla stock right now and do it,” he tweeted.

If you’ve ever been worried about the lil’ FBI agent in your phone watching your every move, you won’t have to worry about them coming from Facebook anymore!

Facebook announced on Tuesday it will be shutting down its facial-recognition system and deleting the face scans of more than 1 billion people.

“This change will represent one of the largest shifts in facial recognition usage in the technology’s history,” Jerome Present, vice president of artificial intelligence for Facebook’s new parent company said. “More than a third of Facebook’s daily active users have opted in to our Face Recognition setting and are able to be recognized, and its removal will result in the deletion of more than a billion people’s individual facial recognition templates.”

About 640 million Facebook’s users have opted in to use the social network’s face recognition system, and Presenti noted the growing concerns about facial-recognition technology’s impact on society. The use of face identification software has sparked public debate because of how it can be misused by government agencies, law enforcement and big corporations.

“Every new technology brings with it potential for both benefit and concern, and we want to find the right balance,” he said.

Facebook previously scaled back the use of another feature that they introduced in December 2010 which used facial-recognition software to automatically identify people in user’s photos. Once the person’s profile was identified, the user could tag them in the photo with just one click.

The company was sued for the tag feature, and agreed to pay $650 million to settle the class-action lawsuit in Illinois. The opposing party accused the site of violating a state law that requires residents’ consent to use their biometric information including their “face geometry”

“Facebook getting out of the face recognition business is a pivotal moment in the growing national discomfort with this technology,” said Adam Schwartz, a senior lawyer with the Electronic Frontier Foundation. “Corporate use of face surveillance is very dangerous to people’s privacy.”