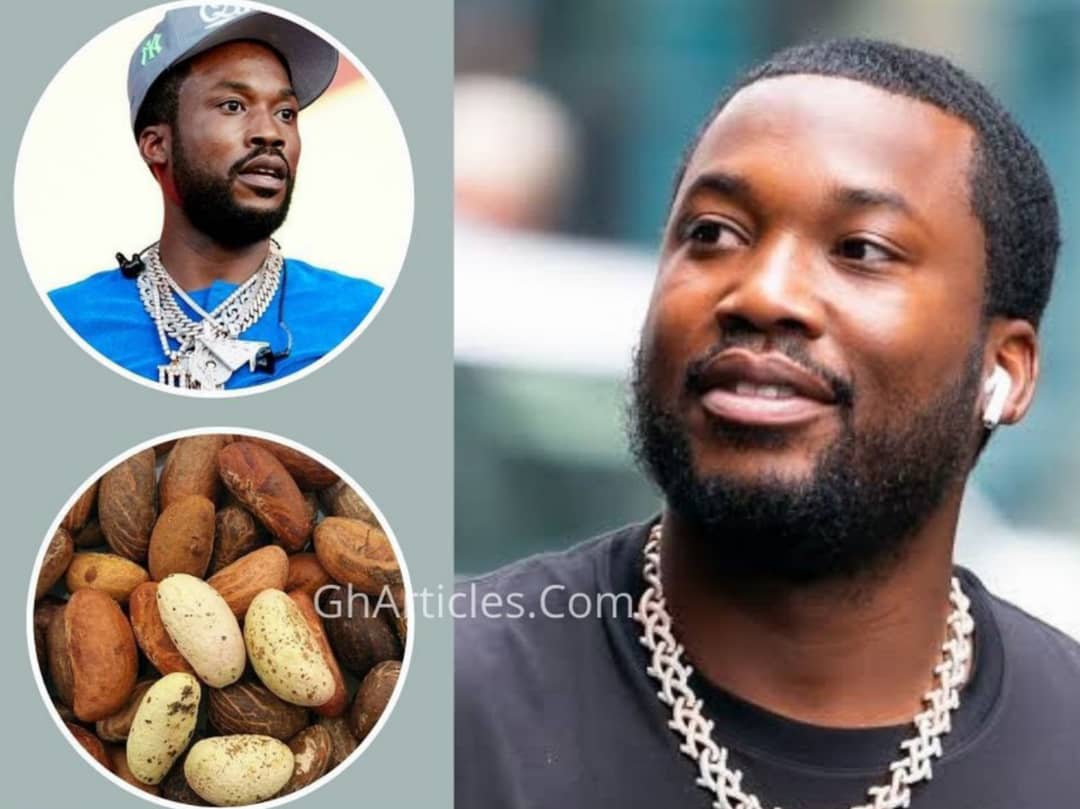 American rapper Meek Mill has taken to the micro-blogging platform, Twitter to sing the praises on the healing powers of African herbs.

The rapper disclosed that he was given some African herbs specifically Bitter Kola and it solved his stomach problem that many doctors have battled for over two years.

In the post, Meek Mill explained that he has spent millions jumping from one doctor to the other but saw no improvement on a problem he had in his stomach.

The award-winning rapper said he decided to experiment with African herbs and to his surprise, the sickness disappeared.

He wrote, “My stomach been messed up almost 2 years I been to a bunch of doctors … I took an African herb and it fixed my stomach like magic!

“Bitter kola nut changed my life…. I feel like we ‘black people’ need to be more educated about Africa!” his words read.

The truth is, Meek Mill has never lost touch with his roots. He is one of the few foreign celebrities who always pay homage to the motherland.

Love Wins As 2face Reconciles With Wife After Cheating Allegations

BIG QUESTION: Kwawkese Says We Should Ask You , If You Still Trust The Award System In Ghana After Shattawale-3Music Saga ?

There is no doubt that Kim Kardashian knows how to get to the bag when it comes to her multiple business ventures, and it looks like she is about to make some noise with her latest collection.

On Monday, Kim announced that her popular loungewear brand SKIMS will be teaming up with high-end fashion brand Fendi, for a new collaboration.

She shared photos from the upcoming line, and it comes in a variety of colors, with of course the popular Fendi prints. From bodysuits to dresses, jackets, two-piece sets, and more, the collaboration is set to drop on November 9th. Kim said, “FENDI X SKIMS- a first of its kind collaboration that unites the luxury of Fendi with the innovation of Skims.”

She also mentioned that the collection will only be available for a limited time.

According to Harper’s Bazaar, Kim Jones from Fendi spoke about the collaboration and said, “The idea for the collaboration came about when my team and I were sitting around a table at the studio in Rome. Suddenly, all the women went silent and started looking at their phones. I didn’t know what was going on, but they were waiting for the launch of the new SKIMS collection. It was then that I thought: Let’s do something together. [Its] mission of creating solutions for all women is directly mirrored within that of Fendi. My Fendi is about creating something for every woman, every different shape—and that’s something at the heart of SKIMS too.”

Kim added, “Both Fendi and SKIMS have a cultural power very different from each other, but equally as strong. We share a desire to push boundaries, think differently, and challenge convention, which is why we found so much common ground collaborating on this collection together.”

When they say the “Fast & Furious” cast is like a real family, they truly mean it. Recently, Meadow Walker, the daughter of the late Paul Walker, tied the knot, and his friend and “Fast & Furious,” co-star Vin Diesel was there to walk Meadow down the aisle for her special day.

On Friday, Meadow shared photos from her recent nuptials to actor Louis Thornton-Allan, and one of the photos she shared was of her and Vin as they began to make their way down the aisle.

Meadow talked with Vogue about her wedding, which took place in the Dominican Republic earlier this month and said, “The pandemic impacted our plans. Louis’s family wasn’t able to attend. A lot of close friends whom we consider family were also unable to attend due to travel restrictions.”

She shared that Loius popped the big question after they had spent some time apart due to the pandemic. She had been working in Europe, and Louis was in New York at the time. He flew to London to surprise her, and as they spent time with his family, he ended up popping the big question.

“After spending more time with his family in England, he couldn’t wait for the ring we had been thinking of designing and proposed with a ring I had been given on set that day. It was so sentimental and sweet. I wouldn’t have wanted it any other way,” said Meadow.

Next month will officially mark eight years since Paul Walker’s passing. At the time of his death, he was in the middle of filming “Fast & Furious 7,” which was later released in 2015.