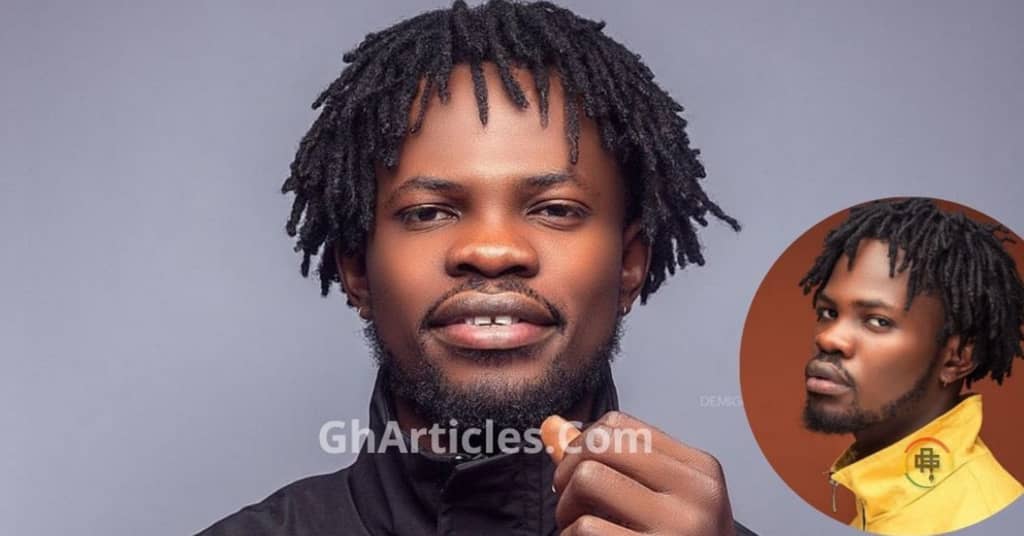 A University of Ghana (Legon) student who was allegedly assaulted by singer Fameye on the Okponglo road last year has revisited the ordeal.

Aside the reckless driving he initailly accused Fameye of, Dave has accused him and his team of theft.

He narrated how at 5:00pm on January 9, 2021, Fameye made a reckless drive close to a traffic light, which nearly swayed the ‘trotro’ he was a passenger in.

He said the life-threatening incident infuriated all the passengers and driver, who particularly alighted to confront the reckless driver.

Dave narrated that it was then they realized the passengers of the black Toyota Camry car with a DV plate including the popular Highlife artiste.

He said while being confronted, all Fameye did was “smiling in the front seat nonchalantly”, which forced him to pull out his phone to record the incident.

The footage, he alleged, earned him some beatings from ‘Fameye’s boys’.

That really annoyed me cos you try and kill me and you say nothing about that??His team in the car said nothing to all waiting from green light to drive off.. i took my phone and began filming for evidence because i cant get away like that..his boys dropped and attacked me,hit me

Aside the beatings received, Dave said Fameye’s boys snatched his iPhone 8 and sped off the moment the traffic light turned green.

He stole my iphone 8, yh it means nothing to you but it meant the world to me and you took it…

A case was subsequently filed at the Legon Police Station against Fameye, and Dave also made an online report.

Reacting to the brouhaha, Fameye posted his side of the story, which confirmed he was indeed involved in reckless driving on that fateful day.

He, however, admitted that Dave’s phone was seized for raining insults on him and his team because he swayed their ‘trotro’ off the road.

Fameye also stated at that time, he believed the video was taken for clout purposes, and that would be a dent on his reputable brand.

In a tweet, he said he planned on returning the phone the next day, but changed his mind when Dave allegedly recruited some keyboard warriors to verbally assault him on Twitter.

Fameye is now ready to return the phone after almost one year and three months, on the condition that Dave makes a video to apologize for filming the ‘superstar’. 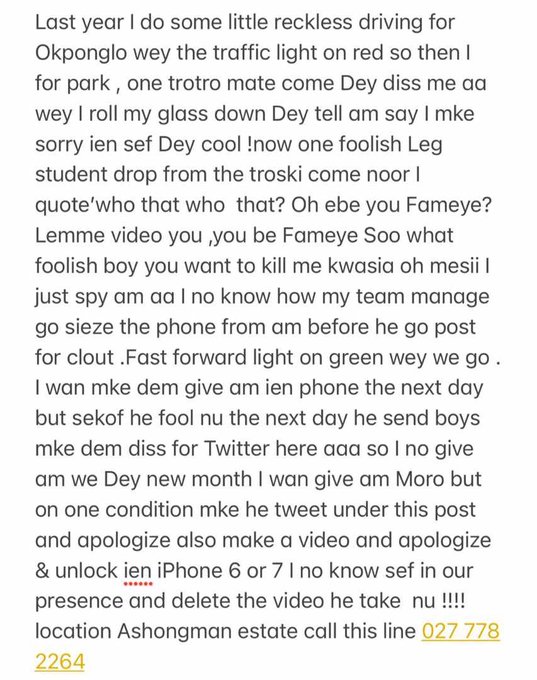 Related Topics:FameyeGhArticlesgharticles.comlegon student
Up Next

If You Jump On Every Trend, You Become Faceless – Nicki Minaj Tells Artistes

THIS IS TRENDING:   “Can’t Wait To Be In My Husband’s House” – Bobrisky Says As He Shows Off Cooking Skills (Video)

THIS IS TRENDING:   Where Were You When Alpha Condé Was Amending The Constitution? - Serwaa Amihere Questions ECOWAS Chair

THIS IS TRENDING:   'They Use Their Money To Buy Weed And Pretend They Have Dipolar' - Kwame A Plus Fires Abena Korkor After She Leaked Serwaa Amihere's Secret Chats With John Boadu

THIS IS TRENDING:   Your Bishop Was A Weed Smoker And Stubborn In School - Kennedy Agyapong Exposes Bishop Agyinasare In His Own Church