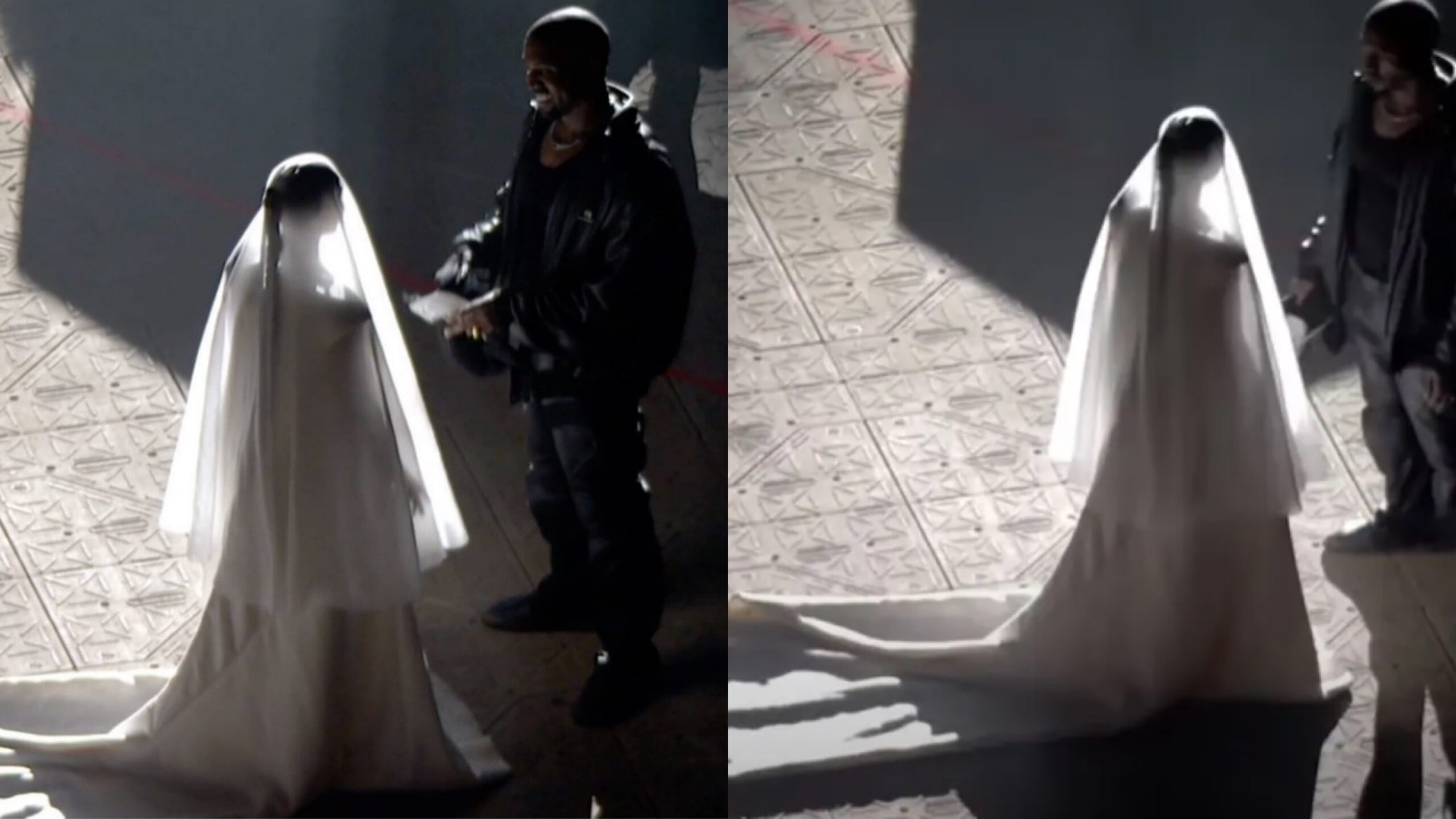 She emerged from the audience in a wedding dress months after filing for divorce from the rapper.

West, a notorious perfectionist, has spent weeks putting the finishing touches on the much-delayed Donda, his 10th studio record, which is named after his late mother.

He held a listening party in his hometown of Chicago.

It was the third such promotional session the rapper, 44, had held for the album, but the first two came and went without Donda’s arrival.

West built a replica of his childhood home at the Soldier Field stadium, inviting almost 40,000 fans to the venue.

The event, which started almost two hours late, also offered on-site vaccinations and featured a cameo from Kardashian West, who attended with their four children.

She appeared in a Balenciaga wedding gown during No Child Left Behind, the final song of the night.

Kardashian West filed for divorce in February after almost seven years of marriage.

Kanye West Sets Himself On Fire At Album Listening (Photos) 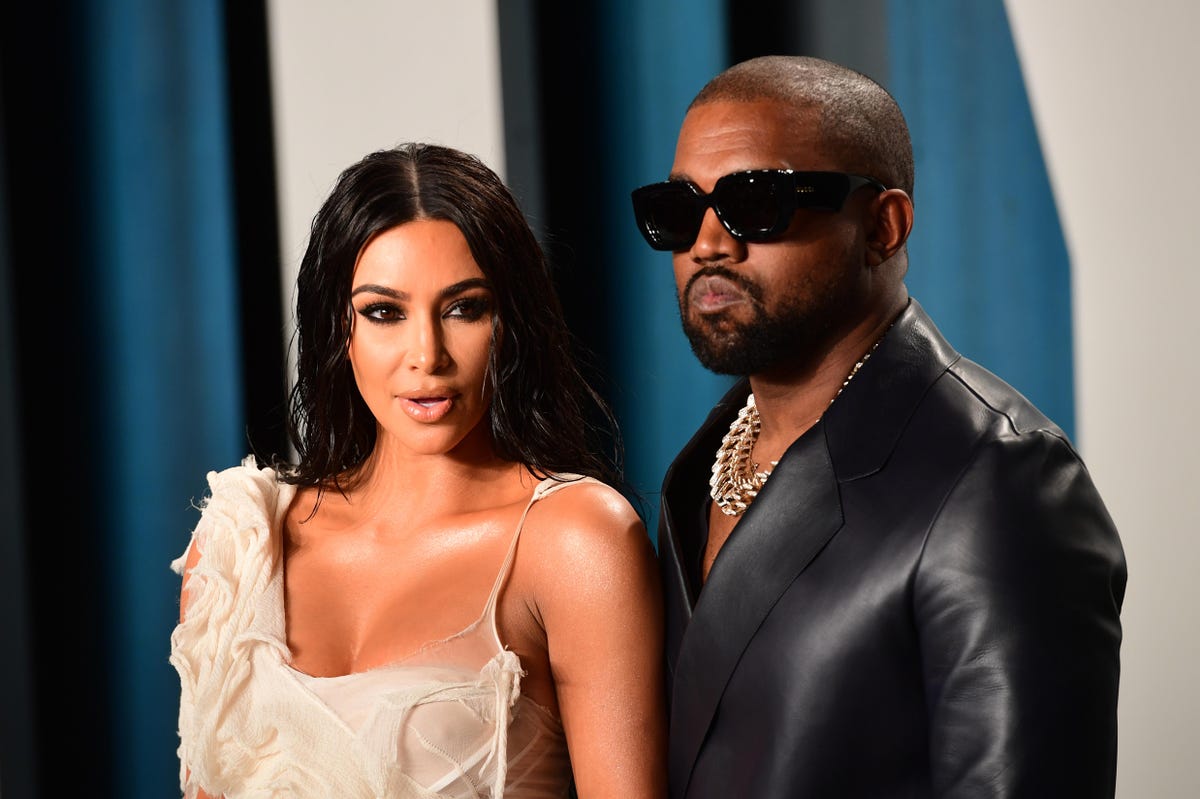 Kanye West is convinced that there’s much more at stake than just his marriage in regard to his impending divorce from Kim Kardashian.

The father of four gave what appeared to be an impromptu speech about his estranged wife and troubled home life at a turkey giveaway in Los Angeles.

According to organizers at the Los Angeles Mission, Kanye West donated more than 1,000 meals to people in need Wednesday at the Mission’s annual Thanksgiving Drive.

“We thank Kanye West for showing his heart and generosity today and bringing over 1,000 meals with him in tow,” tweeted Pastor Troy Vaughn. “Our heart is with Kanye as he continues to show his heart for people who are less fortunate.”

Amid his grand display of giving back, Ye hopped on the mic to talk about what’s going on with him and Kim in a plea to come back home to his family.

Kanye talked about how everything can be redeemed, including his relationship with Kim Kardashian.

Ye admitted he made mistakes and publicly has done things that were “unacceptable” as a husband before setting the record straight that he won’t let anyone write the narrative about his family.

“I’m here to change that narrative…I am the priest of my home. I have to be next to my children as much as possible. So when I’m out the house, I got a house right next to the house.”

READ ALSO:   Give Him Back His Mobile Phone - Court Orders Police To Release Shatta Wale's Phone

Then Kanye said he needs to be back home with Kim and the kids.

“I’m trying to express this in the most sane way possible, the most calm way possible, but I need to be back at home,” Kanye said. “If the enemy can separate Kimye, there’s going to be millions of families that feel like that separation is OK.”

Kanye proceeded to say that them staying together has the potential to influence millions of families to do the same.

“But when the kingdom, when God, who has already won…brings Kimye together, there’s gonna be millions of families that are gonna be influenced to say that they can overcome the work of separation of trauma.”

You can watch Kanye’s speech below: 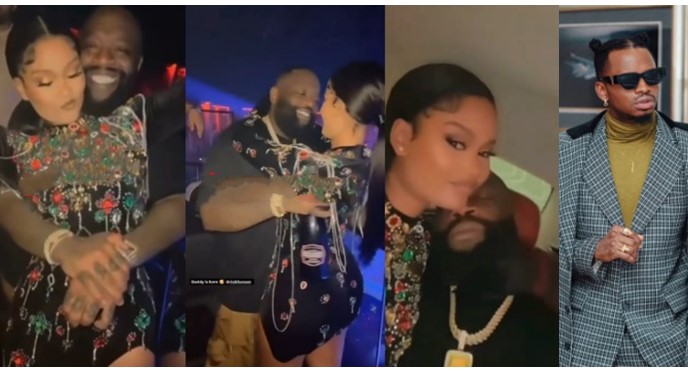 Taking to social media, Hamisa shared video clips that captured her and Rick Ross having a night out full of fun.

In the shared video clips, Hamisa and Rick Ross are seen warming up to each other in a way that suggests the two could be in a romantic relationship.

“Daddy and mommy @richforever & @hamisamobetto. We are happy guys… what a morning,” read a post from Hamisa’s personal assistant.

Just two months ago, Rick Ross born William Leonard Roberts II, revealed that there is a connection between him and Hamisa.

According to him, Hamisa is a hard-working business lady who deserves to be supported in all ways.

“I have to be honest, there is a connection, how much you wanna me to tell you about it? I’m gonna leave that to her. So, I want you to make sure you do an interview with her,” he said in part.

Speaking publicly about their relationship, Rick Ross described her as a strong woman, saying he was willing to take her to the next level because he was proud of her success.

“She is such a beautiful person, beautiful spirit and she is a huge entrepreneur and I want to help her take it to the next level because she is doing a great job and I’m proud of her,” he added.