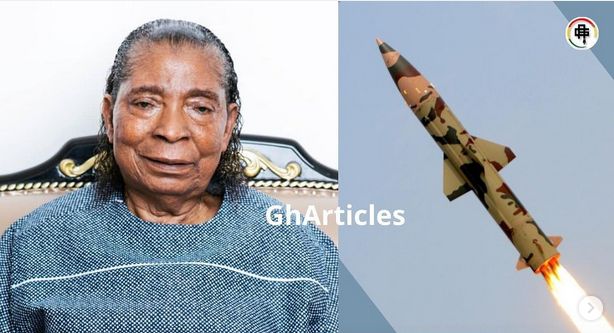 Kantanka Automobile, a Ghana-based automotive company has tested its first missile made in the West African country.

A video on social media showed the missile could travel about 1000 feet.

It is unclear what the full details of this Kantanka made missile is, but we think it’s a good start and innovation that deserves attention and support.

Kantanka Automobile designs manufactures, assembles and sells luxury cars. It was established in 1994 by Kwadwo Safo Kantanka and incorporated as a limited liability into the manufacturing of automotive components.

Kantanka is also alleged to have manufactured military hardware such as armoured personnel carriers, tanks, and helicopters.

However, these devices appear to use fireworks as their primary weapons system. They have also developed combat exoskeletons, which appear to function more as costume props than true weapons systems.

Kantanka launched an armoured vehicle with a rangefinder in the 2018 Annual Technology Show at Apostle Safo School of Arts and Sciences.

In a related story, Ghana successfully launched its first satellite into space in 2017.

GhanaSat-1, which was developed by students at All Nations University in Koforidua, was sent into orbit from the International Space Station.

Cheers erupted as 400 people, including the engineers, gathered

in the southern Ghanaian city to watch live pictures of the launch.

It received support from the Japan Aerospace Exploration Agency (JAXA).

‘Get Your A** Up And Work’ – Kim Kardashian Advices Women