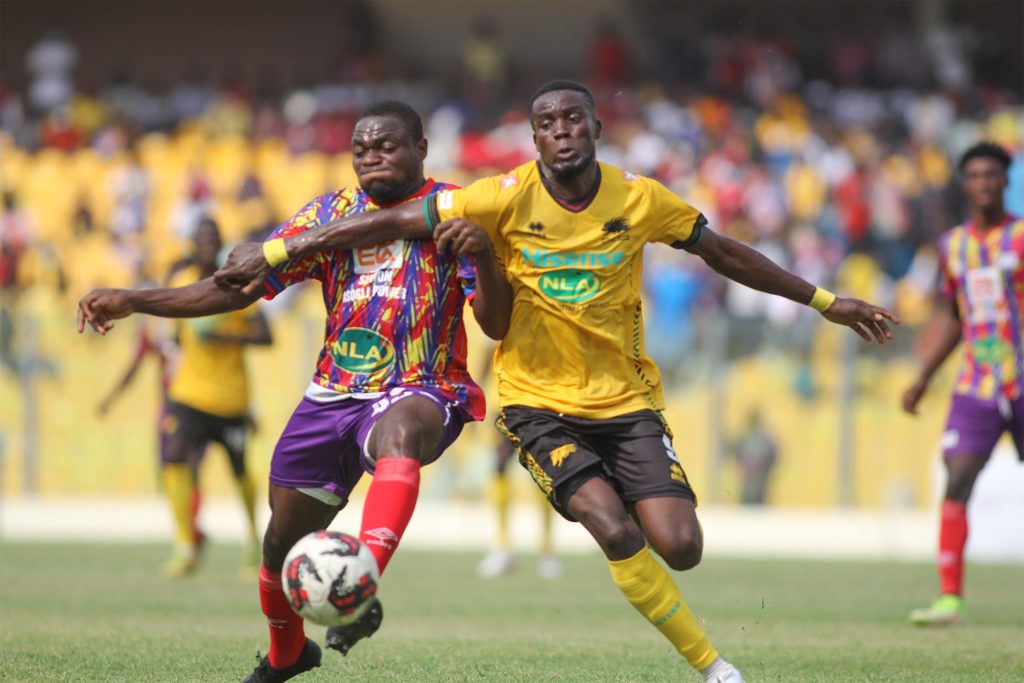 The cagey encounter saw both team spurn some good chances as the spoils were shared in the Super Clash.

Both Samuel Boadu and Prosper Narteh Ogun named strong sets of teams, with an eye on three points and the bragging rights.

Richard Attah started in post for Hearts and was shielded by a back four of Fatawu Mohammed, Dennis Korsah, Mohammed Alhassan and Robert Addo Sowah.

The experienced Sulley Muntari also started in midfield alongside Salim Adams and Abdul-Aziz Nurudeen for the home side.

Daniel Afriyie Barniah, Gladson Awako and Kojo Obeng Junior led the attack for the home side as they aimed to return to winning ways after a two-game winless run.

Meanwhile, Danlad Ibrahim was between the sticks for Kotoko, with Augustine Agyapong, Munarik Yussif, Abdul Ganiu Ismail and Moro Ibrahim starting in defence.

Hearts started the game on the ascendency and created two very good chances within the opening three minutes.

Awako called Danlad into action with a straight shot but the goalkeeper was up to the task, parrying the ball away. From the resulting corner, Muntari laid the ball at the feet of Barnieh but the attacker’s shot ended up in the stands.

In the 10th minute, Muntari had Hearts’ biggest chance when he was left free in the Kotoko box but the former Inter Milan midfielder’s acrobatic effort went off target.

Kotoko’s first shot on target came in the 12th minute when Etouga, who is the league’s top scorer with 11 goals, tried to beat Attah with a looping effort but the goalkeeper reacted brilliantly to save the ball.

Seconds later, the Hearts nearly took the lead but Obeng Junior was unfortunate to see his strike come off the post after being set up by Barnieh.

Despite the early dominance by the Phobians, Kotoko warmed themselves into the game and finally settled by the half-hour mark.

THIS IS TRENDING:   Cristiano Ronaldo Reacts To Ballon d’Or Lies After Missing The Event

The Porcupine Warriors began dictating play, although chances were far and few between for Ogun’s side, whose main source of goal threat was from the Cameroonian duo Etouga and Mfegue.

Both were very lively in the first half and Attah needed to be at his best to stop a goal-bound low shot from the latter, as the first half ended goalless.

A bright start to the second half saw Atta tested again, this time producing an excellent save to deny Lamptey’s close-range shot.

Not many chances came the way of both Hearts and Kotoko in the second half as the game got keener and keener as the minutes wore on.

The goalless draw means the Procupin Warriors have moved seven points clear at the top of the league table and 12 points ahead of rivals Hearts.

Meanwhile, Boadu’s side will end the first round of the league in seventh position.

THIS IS TRENDING:   Cristiano Ronaldo Finally Opens Up On His Future In A Statement

THIS IS TRENDING:   Massive Outburst of Love For Legendary Micheal Essien on His Birthday
The Black Stars booked their place at the quadrennial tournament on away goals following a 1-1 aggregate score against West African rivals Nigeria in March.
“I shall surely be in Qatar but maybe a pundit or let’s see,” Gyan added.

THIS IS TRENDING:   Cristiano Ronaldo Finally Opens Up On His Future In A Statement