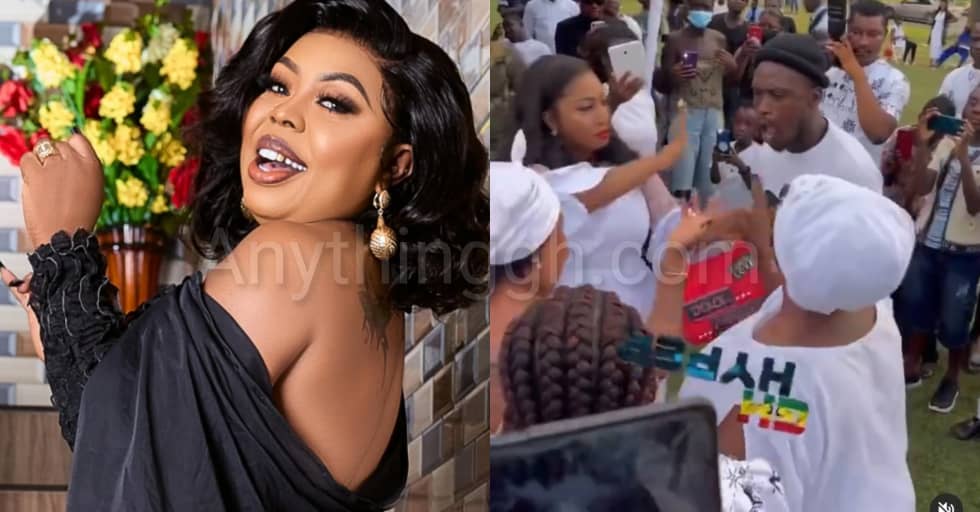 Ghanaian socialite Afia Schwarzenegger has been in the news for the past few days due to the star-studded funeral of her late dad in Kumasi.

The last part of the burial and funeral rites of the actress’ late dad was performed yesterday which is the thanksgiving service.

During Empress Gifty electric performance, Afia Schwar and some family members hit the dance floor to display their dancing skills.

While dancing some family and friends were seen raining money on her, however, one young guy believed to be member family attempted to take some of the money they rained on the controversial socialite.

Afia Schwar quickly slapped the guy which nearly caused chaos but the guy was quickly stopped from creating a bad scene.

Afia quickly regained herself and continued to dance to Empress Gifty’s performance.

A fan of Afia Schwarzenegger asked her why she slapped the guy on social media under a comment section.

According to Afia, she slapped the guy because he was abusing her step-sister at funeral that’s why she slapped him.

Chief of Staff Gave Me ¢50,000 For My Father’s Funeral – Afia Schwarzenegger Reveals