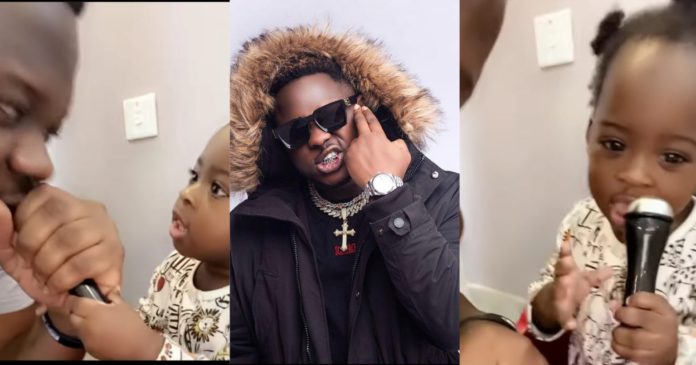 Ghanaian rapper, Medikal, has stirred laughter on social media with a video that showed him taking his year-old daughter, Baby Island, through rap lessons.

In the video, which has attracted mixed reactions, the baby appeared excited over the family moment.

Without hesitation, she grabbed the mini microphone her dad was using and put it in her mouth.

To prove she will fit in her father’s shoes in the future, the little girl said a few words into the microphone to the admiration of fans.

Watch the video attached below:

Speaking about family goals, Stonebwoy has left many in tatters following a video of him dancing with his adorable kids, Jidula and Janam.

In an earlier report by GhArticles.com, Stonebwoy and his two kids appeared to be having a family moment in their home.

While spending quality time together, the trio decided to show off their dance moves and requested a song to dance to.

As it is to be expected, daddy Stonebwoy chose to play one of his own songs and he called his kids to join him on the dancefloor.

The first child of the Putuu crooner, Catherine Jidula Satekla, was up to the task and was able to replicate most of her dad’s dance moves.

However, Stonebwoy’s second child, Janam Joachim Satekla famed as Jahjah, was not ‘seeing the dance top’ as he tried his best to prove he could dance too.

The adorable video saw the father and son dancing to the song blasting from a miniature Bluetooth speaker.

They were seen dancing by the swimming pool in their plush home as they all put in the work to make the video beautiful.