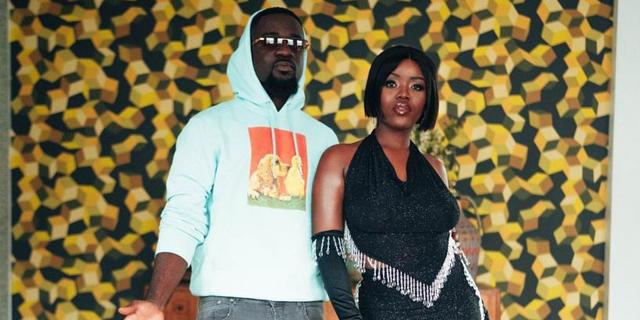 Ghanaian rapper, Michael Owusu, popularly known as Sarkodie has angrily reacts to a Pulse Ghana publication about an alleged feature with Gyakie after the news house corrected the earlier report.

In an earlier report filed by Pulse Ghana, it claimed that Adonai hitmaker, has refuted reports that he is recording a song with songstress, Gyakie.

Sarkodie responded to a tweet by Pulse Ghana about a collaborative work between the two.

According to him, he is not recording with Gyakie but only happens to be present at Gyakie’s studio session.

He tweeted: “No track yet pls I just happen to be around the queen’s session.”

There have been several reports mostly in the Ghanaian tabloids about the Sarkodie and Gyakie recording a song together when they linked up days ago in London.

The SarkNation boss shared photos of himself and Gyakie and Blaq Jerzee, one of the top Nigerian music producers.

There is also the presence of Gyakie’s manager Electro Mirror and Ceek’s Jay Kjs.

Gyakie is one of the promising young talents emerging in Ghana. She broke out with “Forever” which became an instant hit across Africa.

Her remix with Omah Lay and subsequent promotion and activation in Nigeria was criticized by many industry players, accusing her of neglecting the Ghanaian space.

The Happy Day crooner is yet to cook a song with her, for now, but Gyakie has records with D-Black, Bisa Kdei, Yaw Tog, and Amerado.

The multiple award-winning rapper chanced on the headline on Twitter and he became angry after they gave a a misleading headline.

THIS IS TRENDING:   Cardi B Faces Up To 4 Years In Prison In Assault Case

Taking to Twitter to vent his anger on Pulse Ghana over the wrong caption, he said they would not lose anything to verify and publish the right content.

Sarkodie said he was not denying their earlier reportage that he has recorded a song with the ‘Forever’ hitmaker but he was correcting them but Pulse Ghana captioned the headline as “Sarkodie denies recording a song with Gyakie.”

Martha Ankomah Says ‘Yes’ To Kwadwo Sheldon’s Proposal; This Is How The Actress Reacted

THIS IS TRENDING:   'The Queen Is Back!!!' - Nana Ama McBrown Announces Her Comeback To Mainstream Media

THIS IS TRENDING:   Cardi B Faces Up To 4 Years In Prison In Assault Case

THIS IS TRENDING:   I Can't Ki$$ A Guy With Smelly Bad Breath - Bobrisky Reveals