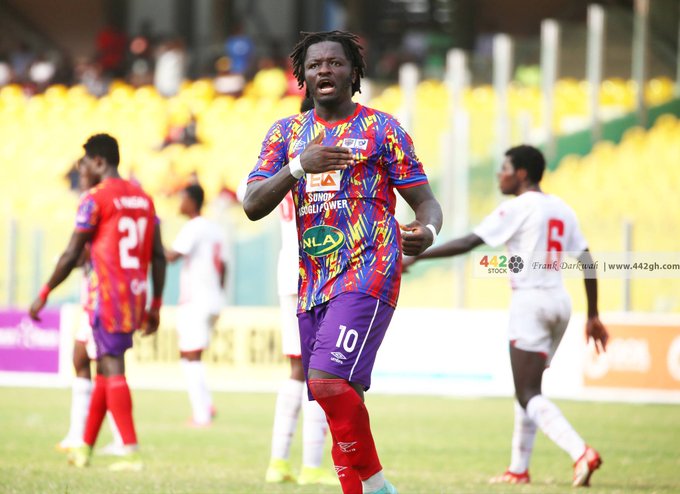 Hearts of Oak board member, Dr Nyaho-Nyaho Tamakloe, has revealed that Sulley Muntari is willing to play for the club at a cost of just Ghc1.

The 37-year-old, following his return to the Ghana Premier League, has been impressive with many insisting on his inclusion into the Black Stars squad for the 2022 Fifa World Cup playoffs against Nigeria later this month.

Muntari has made five appearances for the reigning Ghana Premier League champions, recording two assists and scoring a goal in the process.

Adomonline.com, however, understands that the club has started talks with the former AC Milan ace to extend his stay with the club.

Dr Tamakloe, speaking to Asempa FM on the Ultimate Sports Show, revealed that Muntari is happy at the club and is willing to accept Ghc1 to continue to play for the club.

“We are happy we have a player like Sulley Muntari in our squad,” the former Ghana Football Association chairman said.

“In terms of finances, Muntari is willing to accept just Ghc1 to play for the club. He loves the club and he has demonstrated that on the pitch,” he added.

Muntari played a vital role when the Phobians defeated Asante Kotoko to win the 2022 President’s Cup at the Accra Sports Stadium.

Meanwhile, Muntari is back to training after he missed their matchday 20 game against Aduana Stars on medical grounds.

THIS IS TRENDING:   Cristiano Ronaldo’s Rape Case Must Be Dismissed – Judge

THIS IS TRENDING:   Drama As FA Accuses Female Footballer Of Being Male Demands Gender Test
The Black Stars booked their place at the quadrennial tournament on away goals following a 1-1 aggregate score against West African rivals Nigeria in March.
“I shall surely be in Qatar but maybe a pundit or let’s see,” Gyan added.

THIS IS TRENDING:   Drama As FA Accuses Female Footballer Of Being Male Demands Gender Test

THIS IS TRENDING:   UEFA Nations League: France Show Class As They Comeback From Behind To Beat Belgium 3-2 - REPORT