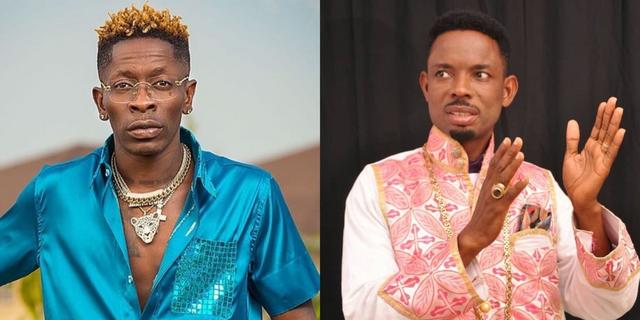 What many thought would bring tension between Shatta Wale and Jesus Ahuofe has rather turned for the better as the latter claims a friendship is brewing between them.

The Founder of the Newlife Kindgom Chapel claims he and Shatta are now best friends,  a discussion they had when they first met.

The said conversation took place in a police van while they were being transported to the court for their case hearing.

In an interview with Adom FM monitored by GhArticles.com, he narrated how they had neither met one-on-one nor had an encounter, except for the prophecy of doom he publicly revealed about Shatta.

THIS IS TRENDING:   'Your Husband Drives Miles To Come Eat My P*$$y' - Abena Korkor Shades Victoria Lebene In New Video

“When we were going to court and he saw me in the police van, he recognised me and told me we will be friends after the court case. That’s what he told me,” he said.

When asked if Shatta Wale blamed him for his role in putting him behind prison cells, Jesus Ahuofe stated that the former understands it was just a vision, adding that there was no harm involved.

He, however, prayed that the charges of publication of false information and causing fear and panic would be dropped and Shatta regains his freedom.

THIS IS TRENDING:   I Am Proud Of Ghana – Paul Okoye Of P-Square Says

“I am praying for him, and I know by God’s grace he will not be imprisoned. God is capable of everything so I know it [jail term] will not come to pass,” he added.

“Martha Ankomah Is My Crush, Am Ever Ready To Wash Her Panties” – Kwadwo Sheldon

Akufo-Addo’s Alleged Sidechic, Serwaa Broni Claims He Used National Security To Rob Her After She Rejected Him; Drops More Evidence

THIS IS TRENDING:   I Will Cry If D-Black Terminates My Contract - Songstress Sefa

THIS IS TRENDING:   Actress Xandy Kamel Ties The Knot With King Kaninja Of Angel TV.

THIS IS TRENDING:   He was calling my wife at midnight - Osebor Confirms Kennedy Agyarpong's Allegations