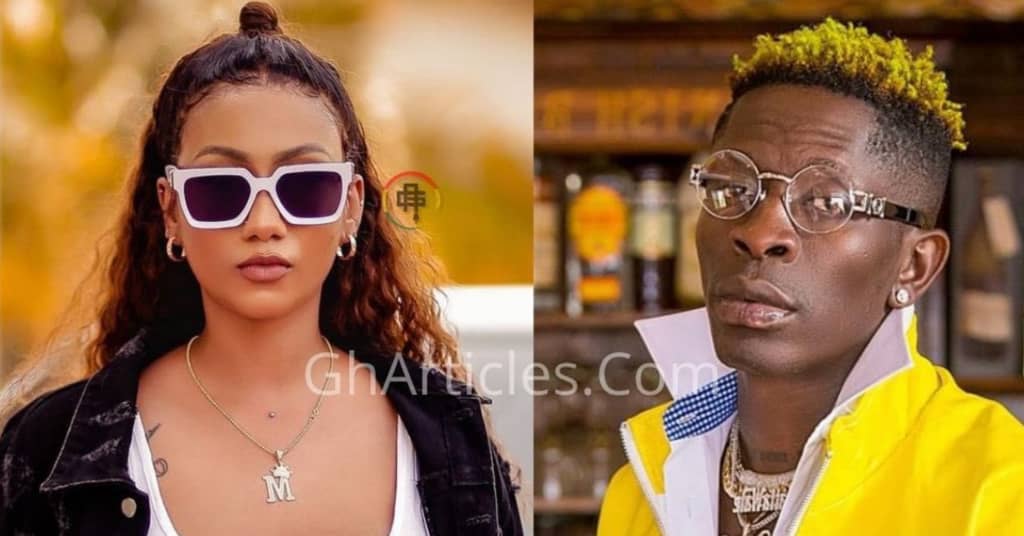 Ghanaian socialite and businesswoman now turned a musician, Mona Montrage popularly known as Mona4Real has reacted to Shatta Wale’s actions that has ended him at the Ankaful Prison.

Recall, the Already hitmaker was remanded by an Accra Circuit Court after he was arrest by the Ghana Police for faking a shooting incident.

Shatta Wale was sentenced to a 10-day remand at Ankaful prison when he appeared before the court a day after his arrest with 3 others in connection with the shooting hoax.

Since the arrest and detention of the Ayoo crooner, Ghanaian celebs and fans have been reacting to the issue as they share their varied opinions.

Following this, the God’s Child hitmker speaking on United Showbiz on UTV said Shatta Wale was fighting for a cause but little did he know it will go to that extend.

“I think Shatta Wale was trying to fight for a cause but he did not know it will go to that extend,” Mona4Real said.

THIS IS TRENDING:   'I'll Legalize Prostitution And Marijuana Over LGBTQI+ If I Had The Power' - Sister Afia

She further noted that it is about time pastors who go on national television and radio to drop death prophecies about people especially celebrities should cease.

According to her, although Shatta overreacted to the whole situation failing to control himself but on the other hand, the pastors need to stop revealing death prophecies about people.

Abeiku Santana, host of the Show said he totally agrees with Mona4Real, explaining further he said some of these pastors prefer to drop death prophecies about famous celebrities in order to draw people’s attention to his church once it comes to pass.

He added that it could even happen that some people may take advantage of that death prophecy about that person and kill the person.

According to him, he agrees with the IGP for arresting all the culprit who were involved in the whole alleged gunshot hoax.

THIS IS TRENDING:   'I Don't Like Going To Church' - Majid Michel Shockingly Reveals

Meanwhile, a sad video of multiple award-winning dancehall act, Charles Nii Armah popularly known as Shatta Wale looking sad and scared the very moment he was being prepared for his cell inside Ankaful Prison has just surfaced.

The video sighted by GhArticles.com that is currently making rounds online sees Shatta Wale in handcuff while being prepared for his cell.

The inmates are heard shouting his name while a few others are heard hooting at him.

Although it seems otherwise, Shatta is seen angered and lost in the moment.

This is really tough on the dancehall artist. We pray he comes out strong with more songs to deliver for us. The spirit-filled event was to commemorate the death of Jesus on Good Friday.

Organised at the Thunder Plaza, the theme of the session was Thanking God In Advance, and in attendance were some religious leaders including her pastor husband.

It was during the church service that she delivered a man struggling with financial setbacks and prophesied prosperity into his life.

THIS IS TRENDING:   Elon Musk Named 'Person Of The Year'

She was in her spiritual elements, taken over by the holy spirit, while engaging the mid adult.

Her prophecies were welcomed with resounding applause and series of ‘Amens’.

The Kumawood star accused the self-acclaimed queen of Ghana comedy of influencing the Ghanaian youth negatively with their social media lifestyle and ranting.

Abena Korkor last week came online again to drop another list of men she has allegedly slept with.

Prominent Ghanaian celebs; Stonebwoy and former Black Stars captain, Stephen and Asamoah Gyan were all fingered in her latest expose which sparked a lot mixed reactions on social media.

THIS IS TRENDING:   This World Is Deep – Jim Iyke Recalls Experience At TB Joshua’s Church

However, after some few backlash from some Ghanaians, Abena Korkor apologize to Stonebwoy, Stephen appiah and Asamoah Gyan.

The actor quickly tackled Afia Schwar when took on Abena Korkor, according him, Afia Schwar is also part of the people causing problems in people’s relationships.

He said social media has become a god to some people in Ghana especially Afia Schwar and some celebrities.

He further quizzed why would Afia Schwar go online and lie to Ghanaans that the Chief of Staff, Frema Opare donated GHC50,000 to her during her father’s funeral.

THIS IS TRENDING:   'Shatta Wale Cracked Expensive Joke And IGP Is Not Laughing' - Samini Reacts To Shatta Wale's Apology To Police After Faking His Gunshot Attack

In a rebuttal, Afia Schwar said she makes money from social media. Ghanaian comedienne and media personality, Afia Schwar, has established that any Ghanaian woman who fights her husband over Abena Korkor is stupid.

She stressed that it would be unwise to allow the former TV3 employee to come between their marriage even if they know about their husband’s infidelity.

Afia Schwarzenegger explained that the socialite has been producing the list of men who allegedly laid with her in the past and should not be given prominence, she said while hosting United Showbiz on Saturday, March 19.

THIS IS TRENDING:   Akuapem Poloo Files Notice Of Appeal Against 90-Day Jail Term

”With all due respect, if your husband arrives from work and you nag him about any allegations by Abena Korkor, then you are stupid,” she said.

Afia Schwar explained that: ”I don’t think Ghanaian men are stupid. Abena Korkor, for five years, has been mentioning names. So, the men who try to have amorous relationships with her, are they mad?” she quizzed. It can’t be possible.”

The controversial media personality further mentioned that she doesn’t believe anything Abena Korkor says about prominent people bedding with her.

THIS IS TRENDING:   Elon Musk Named 'Person Of The Year'

Last week, Abena Korkor claimed reggae/dancehall artiste, Stonebwoy, and two former Black Stars captains laid with her. One of the players came out to debunk her claims.