When Robyn Fenty, known to the world as Rihanna, launched Fenty Beauty in 2017, she sought to create a cosmetics company that made “women everywhere (feel) included.”

A perhaps unintended consequence: The beauty line has helped her enter one of the world’s most exclusive ranks: Billionaire.

Rihanna is now worth $1.7 billion, Forbes estimates—making her the wealthiest female musician in the world and second only to Oprah Winfrey as the richest female entertainer. But it’s not her music that’s made her so wealthy.

The bulk of her fortune (an estimated $1.4 billion) comes from the value of Fenty Beauty, of which Forbes can now confirm she owns 50%. Much of the rest lies in her stake in her lingerie company, Savage x Fenty, worth an estimated $270 million, and her earnings from her career as a chart-topping musician and actress.

While Barbados-born Rihanna isn’t the only celebrity to capitalize on her social media presence—she has 101 million followers on Instagram and 102.5 million on Twitter—to build a beauty brand, she is the most successful beauty entrepreneur to do so.

Fenty Beauty, which is a 50-50 joint venture with French luxury goods conglomerate LVMH (run by Bernard Arnault, the world’s second-richest person), launched in 2017 with the goal of inclusivity. Its products come in a diverse range of colours—the foundation is offered in 50 shades, including harder-to-find darker shades for women of colour—and are modelled in its advertising by an equally diverse group of people.

Available online and at Sephora stores, which are also owned by LVMH, the products were an instant success. By 2018, its first full calendar year, the line was bringing in more than $550 million in annual revenues, according to LVMH, beating out other celebrity-founded brands like Kylie Jenner’s Kylie Cosmetics, Kim Kardashian West’s KKW Beauty and Jessica Alba’s Honest Co.

“A lot of women felt there were no lines out there that catered to their skin tone. It was light, medium, medium-dark, dark,” says Shannon Coyne, co-founder of consumer products consultancy Bluestock Advisors. “We all know that’s not reality. She was one of the first brands that came out and said, ‘I want to speak to all of those different people.’”

While cosmetics sales slowed during the pandemic, beauty companies are worth as much as ever. Stocks of larger beauty conglomerates like Estée Lauder and L’Oréal have bounced back, reaching all-time highs and trading at impressive 7.5 (or more) times annual revenues.

A post shared by FENTY BEAUTY BY RIHANNA (@fentybeauty)

That is good news for Rihanna. Thanks to the impressive multiples at which beauty companies are trading, Fenty Beauty is worth a conservative $2.8 billion, Forbes estimates. And all signs point to the company continuing to grow.

In its annual report for 2020, LVMH said Fenty Skin, which launched last year, was off to a “very promising start” and “generated unprecedented buzz,” and that Fenty Beauty “maintained its appeal as a premier make up brand.”

Fenty Beauty isn’t Rihanna’s only billion-dollar brand. In February her lingerie line Savage x Fenty raised $115 million in funding at a $1 billion valuation. The company, which launched in 2018 as a joint venture with TechStyle Fashion Group, counts blue-chip investors like Jay-Z’s Marcy Venture Partners and private equity firm L. Catterton (in which Bernard Arnault is an investor) as shareholders.

Rihanna maintains a 30% ownership stake, Forbes estimates. The latest round of funding will reportedly be used for customer acquisition and retail expansion.

Not that everything Rihanna touches turns to gold.  In February, LVMH and Rihanna confirmed in a statement to Forbes that they had shut down their other venture, a high-end fashion and accessories house also called Fenty.

Launched in 2019, Fenty sought to extend Rihanna’s brand of inclusivity and offer styles in a range of sizes. But like many luxury fashion brands, the high-priced line suffered during the pandemic, releasing its last collection in November 2020.

The only complaint some fans may have about her career as a fashion and beauty mogul? It keeps her busy. The singer, who used to release an album almost every year, hasn’t released a new album since 2016’s Anti.

From a financial perspective, that may be just fine: “She is creating a brand outside of herself. It’s not just about Rihanna,” says consultant Coyne. “Even if you don’t like her music, she’s created a real style in the fashion and beauty space.”

READ ALSO:   Did You Miss The 21' VMA Awards? Check Out The Complete List Of Winners For The Night
Related Topics:FentyGh ArticlesGhana ArticlesRihanna
Up Next

Roommates, these days it seems that practically everyone in the music industry has an opinion about Lil Nas X—and you can now add T-Pain to the list as well.

Following the release of Lil Nas X’s debut album “Montero,” T-Pain decided to take to social media to voice his opinion regarding those who frequently criticize him.

Posting to his Twitter account, T-Pain wrote the following about Lil Nas X in comparison to his music industry peers:

“It n***as with 3x the budget that Lil Nas X got and still can’t do what he do because they too cool to be funny. N***as really too gangsta to make more money. You ain’t gotta kiss a dude in the mouth but I also don’t need to feel like I’m gonna die watching ur video.”

As you know, Lil Nas X has been at the center of controversy for the majority of the year, with several of his outlandish antics making headlines. From the “Satan shoes” dispute with Nike and the pole-dancing music video that accompanied it to the male-on-male kiss at the BET Awards and his recent “pregnancy” to celebrate the release of his new album, he has managed to find himself in the middle of harsh opinions and backlash continuously.

Unlike T-Pain, one of Lil Nas X’s harshest critics is the outspoken Boosie, who has never held back when it comes to definitely not being a fan of his image, his music or his antics.

Chris Rock has tested positive for Covid-19 and is urging his followers to get vaccinated.

The stand-up comedian announced the news on Twitter on Sunday and insinuated that his symptoms are on the more severe side.

“Hey guys I just found out I have COVID, trust me you don’t want this,” Rock tweeted. “Get vaccinated.”

Many fans responded to the “Grown Ups” star’s tweet with well wishes, but some wondered if he hadn’t been vaccinated despite advocating for it; however, in May, Rock joked on “The Tonight Show” that he cut the vaccination line in order to receive the jab.

“I’m two-shots Rock, that’s what they call me,” the “Tamborine” comedian quipped, before specifying he received the Johnson & Johnson vaccine, which is a single-dose jab. “That’s the food stamps of vaccines.”

Seemingly joking, Rock quipped that he “used” his “celebrity” to be one of the first to get the vaccine.

“I was like, ‘Step aside, Betty White, I did ‘Pootie Tang.’ Step aside, old people,’” he joked. “I was like Billy Zane on the Titanic. Leo [DiCaprio] died. Billy Zane lived to see another day. I don’t want to be Leo at the bottom of the ocean. Billy Zane got another woman after that thing.

“In reality, you want to be Leo — but not in that movie.”

Rock, 56, has been vocal in the fight against COVID throughout the pandemic—and even surprised New Yorkers by appearing at one of former Gov. Andrew Cuomo’s press conferences to urge mask-wearing.

“It’s the kids who really aren’t wearing a mask, and you know, it’s sad,” he said in May 2020. “It’s sad that our health has become, you know, a sort of political issue … It’s a status symbol, almost, to not wear a mask.” 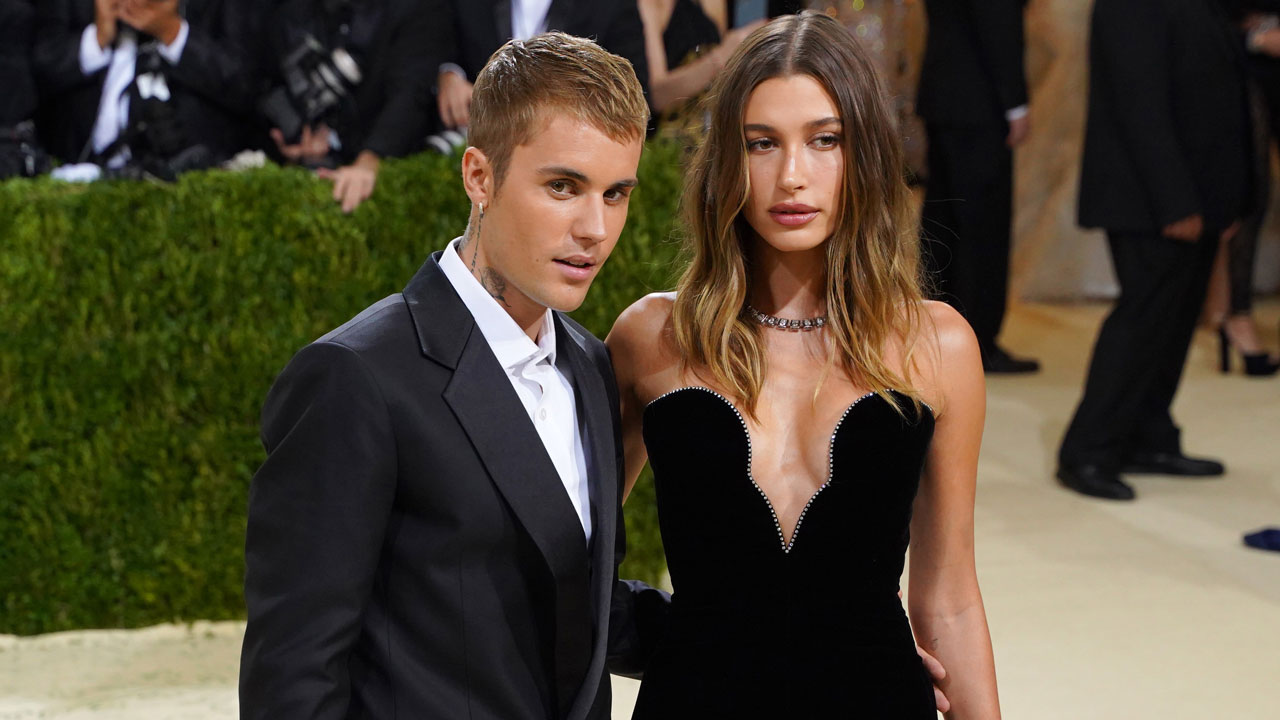 Super model and actress Hailey Bieber said she is lucky to have a husband like Justin Bieber, refuting rumours of the ace singer not treating her properly.

Talking about her popstar husband and rumours around their marriage, Hailey said: “I think one of the biggest things is you have to know what the truth is behind everything. You know, there’s so many narratives that float around about me, about him, about us together.”

She addressed the rumours point blank as she said: “There’s one big fat narrative that goes around that’s like, ‘Justin is not nice to her, and that he mistreats her’, and I’m just like, it’s so far from the truth, and it’s the complete and utter opposite.”

She said: “I really am lucky to say I’m with someone who is extremely respectful of me, who makes me feel special every single day. So when I see the opposite of that, I’m just like, ‘Huh?’ And everybody around who knows us personally would say the same thing.”

Earlier this year, Justin described his wife Hailey Bieber as the “most lovable human on the face of the earth” as he shared Instagram snaps from their romantic holiday in Greece.

The “Yummy” hitmaker shared a picture of him and his stunning model wife and sweetly described her as the “most lovable human on the face of the earth” on Instagram.

Justin captioned the post: “@haileybieber thank you for being the sqishiest most lovable human on the face of the earth . (sic)”