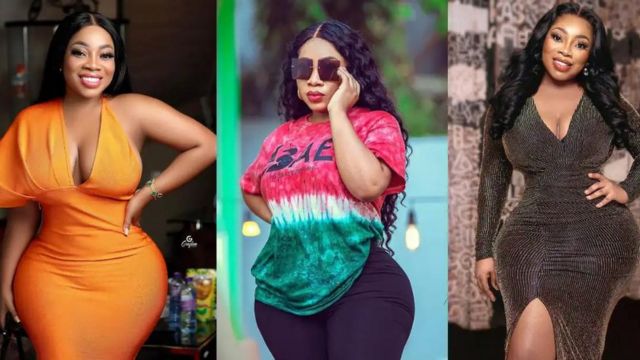 Ghanaian actress and video vixen, Moesha Boduong has been heard in an audio sounding very lively in a conversation with Ayisha Modi.

In the audio, Moesha Boduong was heard saying she was doing well just that she was having a lot of cravings for meat lately.

According to her, she is now poor after losing all her wealth but indicated that she was going to come back strong.

Moesha Boduong also indicated that her body was now the temple of God and that she was going to focus on evangelism when she comes back.

Even though she did not mention where she was, Moesha indicated in the conversation that she was in safe hands.

She also advised Ayisha Modi to exercise restraint when dealing with people because hotheadedness and a quick temper were destrructive.

The actress and Instagram model asked Ayisha not pay heed to her [Moesha’s] haters but rather ask them to take their time with her.

She jokingly added that she was going to ‘tie’ all her haters in a bottle so they stop disturbing her.

Watch her speak below

The Instagram model has got better and stronger after her recent issues.

She recently announced that she had repented and was going to be a born-again Christian after finding Christ.

Since the time of her repentance, the pretty actress has been facing challenges including issues with her mental health.

The born again socialite, who now wants to be known as Mauricia, went off social media to undergo treatment. Ayisha Modi, who has been in Moesha’s close circles after issues of her mental health popped up, has shared a new photo of the actress. The photo has the actress dressed in an African print dress with cornrow braids as she stood by a Toyota 4X4 vehicle.

Sharing the photos, Modi indicated that Moesha was sending greetings and thanking everybody for the prayers and support.

While One Is Promoting The Industry, The Other Is Showing ‘B0rtos’ – Baba Sadiq Shades Shatta Wale In New Post