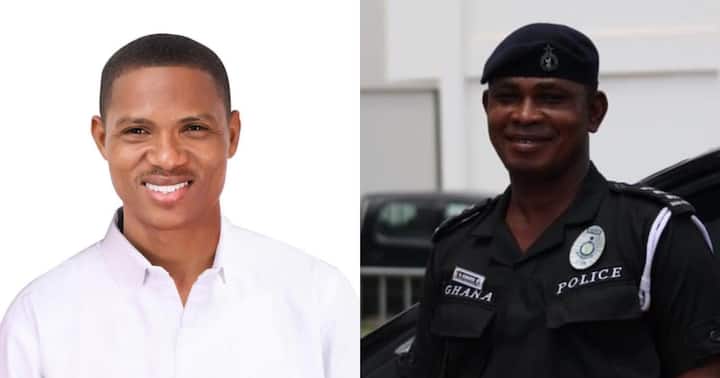 The Police guard assigned to Francis Xavier Sosu, the Member of Parliament for the Madina Constituency, Inspector Daniel Agbavor, has been interdicted.

He was interdicted for alleged misconduct.

In a police press release, Inspector Agbavor was alleged to have driven into a crowd after a protest last Monday, October 25, 2021.

According to the release, his actions directly endangered the lives of two senior officers as well as the life of civilians.

The parliamentary protection unit has, however, been tasked to provide a new guard to the Madina MP.

Meanwhile, the Ghana Police Service has denied any claims that personnel were sent to arrest the Member of Parliament for the Madina constituency, Francis Xavier Sosu, in church.

In a report filed by YEN.com.gh sighted by GhArticles.com, the police said stories circulating on the arrest of Sosu on his church premises on October 31, 2021, is untrue.

The statement further added that any plain police personnel found on the premises of the church may have been there for intelligence purposes and not to effect an arrest.

The statement signed by the Director-General, Public Affairs of the Ghana Police Service, ACP Kwesi Ofori stated that on the day of the protest, Sosu was invited but declined to honor the invitation.

THIS IS TRENDING:   Samira Bawumia Equally Refunds All Allowances Paid To Her; Ghanaians React

Earlier, Ghanaweb reported that personnel from the Ghana Police Service stormed the church premises of Madina lawmaker, Francis-Xavier Kojo Sosu, to arrest him over his protest on Monday, October 25.

Sosu, a lawyer and Member of Parliament for Madina, led the youth to protest deplorable roads in his constituency.

During the demonstration on Monday, the police attempted to arrest the lawmaker for what they described as an unlawful protest.

15 Assembly Members And Others Granted Bail For Cursing Regional Minister

THIS IS TRENDING:   Here Are All The Beautiful Pictures You Missed At The Wedding Of Hawa Koomson's Son

THIS IS TRENDING:   Mayors agree, Congress should invest in affordable housing

THIS IS TRENDING:   Samira Bawumia Equally Refunds All Allowances Paid To Her; Ghanaians React

THIS IS TRENDING:   "Lordina Mahama Should Return Her Allowances Paid To Date" - General Secretary Of NPP