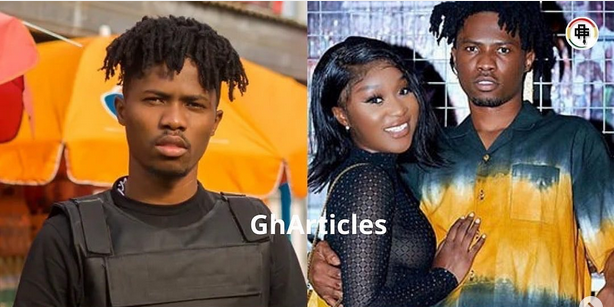 Ghanaian musician, Kwesi Arthur has finally broken his silence after his biggest fan Efia Odo see-through dress she wore to the album listening stole the shine of the programme.

Ghanaian actress and socialite Efia Odo left many talking after she decided to catch the attention of fans who turned at Kwesi Arthur’s album listening.

The sensational Ghanaian musician released his new album titled “Son of Jacob” and held the album listening which was attended by a lot fans, family and friends.

Efia Odo being the musician Kwesi Arthur’s biggest fan stole the show after she dressed no bra to the event.

The viral photos and videos capture Efia Odo who wore a black straight dress which had her looking a like a fishnet and the down covered her private parts.

The controversial brand influencer was not wearing a bra and so n!pples and her breasts her left sagging on her.

Her sense of fashion displayed at the event left many boys salivating on social media after the videos and photos went viral.

Efia Odo has became the talk of town rather than the “Son of Jacob” album.

However, Kwesi Arthur has defended Efia Odo in a recent interview with Abeiku Santana on Ekwansodwodwo.

According to him, he invited Efia to the album listening and she honored his invitation so he’s okay with the dress she came with.

He added that the actress’ dress shows that she’s a confident woman and she was trying to be herself.

Singer noted that Efia’s no bra dress don’t overshadow the album listening because all the people he was expected at the programme were present.