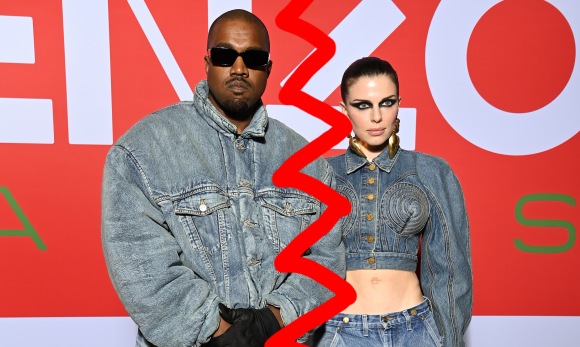 “Julia and Kanye remain good friends and collaborators,” Julia’s rep told ‘E News’ on February 14. The rep continued saying, “but they are no longer together.”

As previously reported, Julia and Kanye first sparked dating rumors at the top of 2022 after being photographed together. By January 6, Julia had written an ‘Interview’ essay about their “instant connection.” Ye also tapped into his romantic side with dinners at Julia’s favorite restaurant Carbone to a hotel suite filled with clothes, matching outfits at Paris Fashion Week and a Birkin bag-filled birthday.

“I’m sure there’s still some residual feelings, and that’s normal, it’s human,” Julia said on ‘Call Her Daddy’ about Kanye and Kim. “But I also know that he’s with me now. And that’s all that matters.”

THIS IS TRENDING:   ‘You Are Stupid If You Fight Your Husband Over Abena Korkor' - Afia Schwar

Hours after the ‘Call Her Daddy’ episode dropped, Kim and her children’s ‘Vogue’ cover and spread were published. Rather than acknowledging Julia’s loving praise on the podcast, Ye set his sights on his family.

“God please bring our family back together,” Kanye wrote under an Instagram repost of the ‘Vogue’ photos.

In the days following his request, Kanye spent time calling out Billie Eilish, Kid Cudi and Kim and her new bae Pete Davidson. On Valentine’s Day, he seemingly attempted to smooth things over with Kim.

“I don’t have beef with Kim,” Kanye wrote. “I love my family so stop that narrative. I’m not giving up on my family.”

He continued on, acknowledging the photo he shared of Kim and Pete, “I bought this coat for Kim before SNL. I thought it was particularly special. I have faith that we’ll be back together.

Shortly before his post, Julia addressed a media outlet’s headline that said she left the Los Angeles airport all alone and in tears.

“…I haven’t cried since 1997 and I especially wouldn’t cry over THIS,” Julia wrote. “If anything I’ve been laughing more than before and if I look like sh*t it’s cuz I got out at terminal 1 and ran on foot to terminal 7 cuz I was fkn late for a plane to go see the only men that matter which is my son and my dad.”

Kanye hasn’t responded to reports of the split. However, he did take time to share what looks like his Valentine’s Day gift for Kimmy. He posted a black truck with roses filling the trunk and white print reading, “My Vision Is Krystal Klear.”

THIS IS TRENDING:   Barack Obama And Michelle Obama Celebrate Their 29th Wedding Anniversary By Leaving Sweet Messages To Each Other On Social Media

THIS IS TRENDING:   “Sammy Kuffuor Will Always Have Sekz With You And Send You Out Without Transportation” – Abena Korkor Reveals

THIS IS TRENDING:   John Mahama's Daughter, Farida Mahama, Posts Her 'Boyfriend' For The First Time On Instagram; Fans React

THIS IS TRENDING:   ‘You Are Stupid If You Fight Your Husband Over Abena Korkor' - Afia Schwar

THIS IS TRENDING:   HOT GOSSIP: Joyce Blessing In Fresh Trouble As Two of Her Children Are Allegedly Not For Her Husband