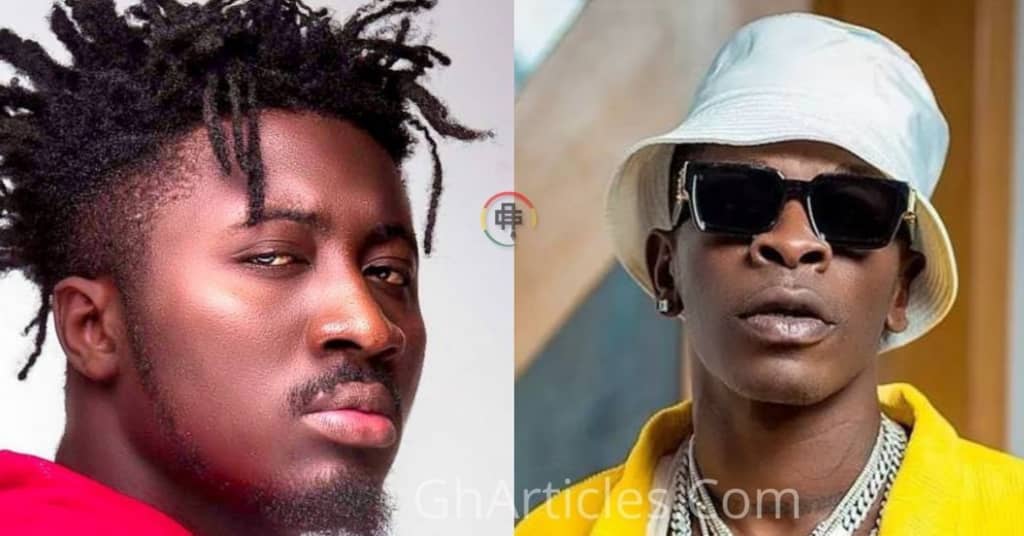 Ghanaian fast rising rapper, Amerado Burner has shockingly disclosed what he would have done if he had the position of the Inspector General of Police for Ghana.

The Kumerican rapper was speaking in an interview with Accra-based Angel FM when he made this revelations.

Speaking about Shatta Wale, he said the multiple award-winning dancehall artiste called him one time in the afternoon to encouraged him.

According to Amerado, Shatta Wale told him on phone that he will become one of the best musicians in Ghana so he should keep working hard.

Apparently, the Ayoo hitmaker had just finished listening to one of his hitsongs and so he called him to encourage him to work hard.

When asked what he would do if he had the position of the IGP, Amerado hilariously disclosed without hesitation that he would quickly re-arrest Shatta Wale and put him back in prison.

THIS IS TRENDING:   'It Is Now Time To Fly Higher' - MzGee Break Silence After Quitting TV3 And 3FM

His comment left everyone laughing in the studio, however, the host admitted that he wasn’t surprise at his answer.

The rapper explained that he feels Shatta is fighting for a good cause, so putting him in prison will even make things smoother for him.

Speaking about Shatta Wale, the self-acclaimed Dancehall King was granted bail two days ago after he was arrested and remanded into Ankaful Prison for faking a shooting incident.

The Taking Over hitmaker re-appeared before the Accra Circuit on Tuesday after spending a week in Ankaful prison, his lawyers finally secured a bail of GHC100,000 together with his three accomplices.

Ghanaian rapper Medikal who was also charged by the court for brandishing a weapon on social media also secured a bail of GHC100,000.

THIS IS TRENDING:   Who's Ready For My Bikini Pictures? - Serwaa Amihere Asks As She Drops Stunning Photos From Vacation

The two musicians are poised to re-appear before the court again on November 9, 2021.

Still on Shatta and Medikal, following their release from prison, the musicians who are friends after going through the bail process to be released from the Ankaful Prison headed over to a beach for a ‘spiritual cleansing’ bath.

Some people hold the belief that after anyone comes out from prison, they must have a sea bath to wash away any bad omen before they are incorporated into society.

Shatta Wale and Medikal accordingly did this at a beach in the company of their close friends and family.

THIS IS TRENDING:   If I Love You No Mean Say I Fool- Shatta Wale Shades Michy As He Thanks Elfreda For Loving Him

THIS IS TRENDING:   Moesha Bodoung Saved From Attempted Suicide

THIS IS TRENDING:   ‘The World Is About To Enjoy Me Like Ashawo Girl’ – Shatta Wale