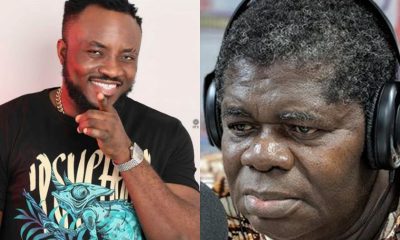 Actor Psalm Adjetefio popularly known as ‘T.T’ of ‘Taxi Driver’ fame recently fired out at DKB for calling him an embarrassment.

According to T.T, DKB should shut up and stop saying stupid things because he has no idea what went on in his life to bring him to this point.

The veteran actor in recent days has come out to beg Ghanaians for help to pay his rent because he’s broke beyond belief.

His begging spree yielded immediate fruits, with Vice President Dr Mahamudu Bawumia accepting to pay for his rent for five years (Ghc 30,000) and giving him a sum of Ghc 20,000 for his upkeep.

Greater Accra Regional Minister Honourable Henry Quartey also gave him a monthly stipend of Ghc 1,500 to be paid out of his MP’s salary until January 2025.

In light of all that, DKB came out to record a video calling Psalm Adjetefio an ’embarrassment’.

According to him, all that begging is embarrassing to the creative arts sector and paints them in a bad light.

He also advised the old man to invest the Ghc 20,000 Dr Bawumia gave him and not spend it recklessly.

The actor appears to have heard DKB’s words and the comments of others saying he did not manage his youth well and taken issue with that.

Recording a video response, he blamed his current state on sickness and warned his critics to pray that sickness never takes away their wealth like has happened to him.

He also had harsh words for DKB and those attacking him.

“So please, know how to talk. If you don’t have anything to talk about, keep your mouth shut. I pray that those of you saying all those stupid things, may the father send the devil to visit you…” he fired.

He doesn’t sound so old and infirm anymore hitting back at his critics.

Following that, DKB has taken to Twitter to clarify his message he recorded in a video calling the veteran actor an ’embarrasement’ for begging.

According to him, he was only advising the actor on what to do with the new money donated to him by the Veep and Henry.

So I do a video giving financial advice to embattled legend Psalm Adjeteyfio, but cos of hatred against the brand DKB, a response video to his critic that has nothing to do with me, is what some unintelligent journalists & media Houses used as his reply to me. 🤦‍♂️

He added that some media houses and journalist have tagged him to TT’s reply to him because of their hatred for him which has nothing to do with him.