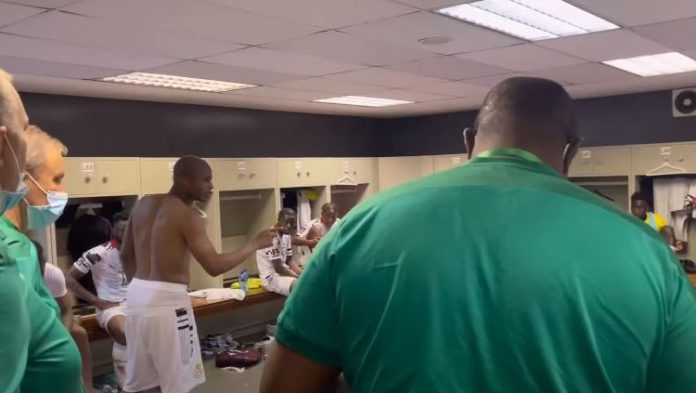 Following Black Stars 1-1 draw game against Ethiopia, many Ghanaians went to the drawing board to analyze how the country can make it to the Mundial next year in Qatar.

In the matchday five games against Ethiopia at the Orlando Stadium, Milovan Rajevac and his charges failed to keep their momentum of the 2022 World Cup qualifiers.

The initial projections had suggested that Ghana needed a two-goal victory over South Africa to qualify after they were held by the Ethiopians.

With the players and technical team’s hope seeming to be lost due to the results, Andre Ayew, who is the captain of the team, gave an impassioned speech to his teammates with the head coach, Milovan Rajevac and his assistants looking on.

Ahead of the game against Bafana Bafana, the Al Sadd forward cautioned his teammates they were not handed call up for jokes and further asked anyone who didn’t believe the team could qualify to “go home” when they return to Ghana.

Andre Ayew was determined to ensure Black Stars qualify for the playoffs despite the draw against Ethiopia.

“We’re not here to joke. And anyone who is not ready and doesn’t believe that we can win 2-0, when we get to Ghana, you can go home. Clearly, because we’re going to the World Cup,” Andre Ayew said.

THIS IS TRENDING:   Video Of A Bride And Her Bridesmaid Off-pants, And Twerking Wild At Her Reception

“So if someone jokes, if you know you don’t have the heart; when we land in Ghana and you say you’re going to listen to what Ghanaians are going to say, take your things and go home. We’re going to win and we’ll qualify. So relax, calm down.”

Andre Ayew, however, led by example by scoring the only goal in the decider against South Africa in the final Group G fixture at the Cape Coast Stadium to finish top of the group.

THIS IS TRENDING:   Ghanaian Man Breaks Down Salary Expectation Per Month After John Dumelo Asked On Twitter

THIS IS TRENDING:   Obuasi Wedding Saga: Twitter Users React As Videos And Photos From Richard Agu And Benedicta Pop Up Online

THIS IS TRENDING:   Video Of A Bride And Her Bridesmaid Off-pants, And Twerking Wild At Her Reception