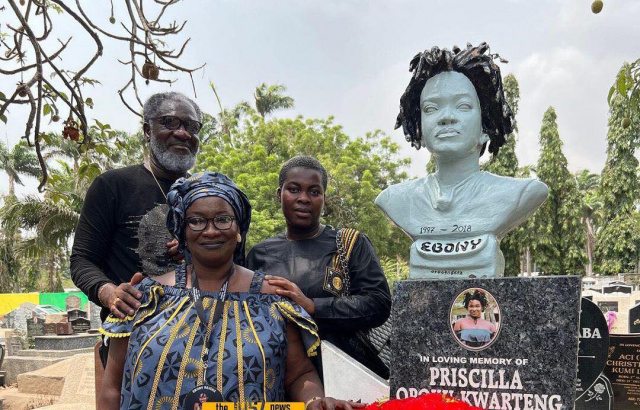 He made this revelation in an interview on Adom FM’s Entertainment Hall with Mike 2 last Saturday.

“She was there. She came home and I could feel her. The television came on by itself and the channel that came on was talking about her life. I knew she was trying to send us a message so I called the others to come and see,” he said.

According to him, he still communicates with his daughter (even though he wouldn’t clearly disclose how he does it) – he claimed he hears her voice and they communicate verbally.

THIS IS TRENDING:   Drake’s New Album Breaks Apple Music’s 2021 Record For Most Streamed Album In A Day

On the 8th she came home. She wanted the people in the house to know she has arrived. Before we went to the cemetery, I was arranging a few things. I have two halls – one down and up.

I went up and the moment I got there, the TV came on by itself. So I made everyone aware of her presence. We couldn’t see her physically but I think she announced herself. The TV channel too proved she was the one who did that.

According to the father of the late dancehall musician, he strongly believes that “her death was orchestrated.”

Ebony Reigns was remembered by her family as they paid a glowing homage to her at her graveside at the Osu Cemetery last week.

This was in remembrance of her legacy as February 8, 2022, marks exactly four years since she was killed in an accident.

We Will Love You To Join Our Over 190k Members Instagram Family With Just One Click @gharticles
Source: GhArticles.com
Related Topics:ebonyEbony ReignsGhArticlesgharticles.comStarboy KwartengVideo
Up Next

THIS IS TRENDING:   'I've Done The Remix To This Song' - Ed Sheeran Reveals On Fireboy DML's 'Peru' (Video)

THIS IS TRENDING:   YouTube Wastes No Time, Removes R. Kelly's Channels After Conviction