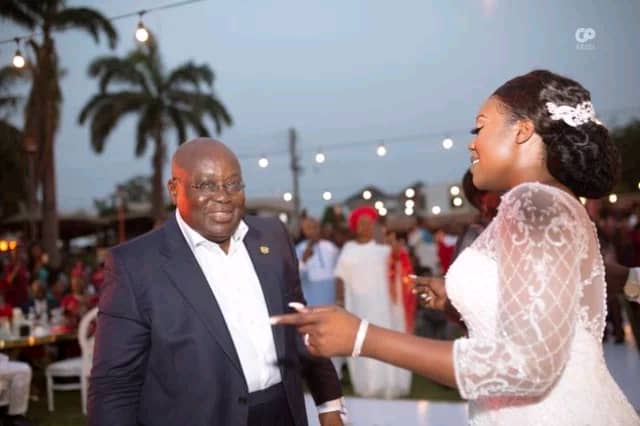 Over the weekend there was joy in the home of the first family as one of President Nana Akufo Addo’s daughters tied the knot.

The viral photos on social media indicates that Edwina Nana Dokua Akufo-Addo married Kwabena Jumah who is the son of a leading member of the governing New Patriotic Party, Maxwelll Kofi Jumah.

Reports indicate that the event which had a limited number of attendees was held at the Presidential Villa on Saturday, October 9, 2021.

Meanwhile, viral videos from the marriage ceremony show a moment President Akufo-Addo took to the dance floor to show off his dancing moves.

President Nana Akufo-Addo has clearly shown that when it comes to moving the body rhythmically to music, he knows his craft

His favourite ‘Oye’ song is one that usually gets him into dancing groove and gingers him to show off some of his moves but on this occasion, even though there was no ‘Oye’, President Akufo-Addo delivered.

His third daughter Edwina Nana Dokua Akufo-Addo tied the knot over the weekend as a proud father, Nana Akufo-Addo could not pass on the opportunity to remind the gathering of his dancing moves.

With his excited daughter and some members of the gathering turning into a hype team, President Akufo-Addo had all the motivation to show off his dancing skills at the event.

In a viral video on social media, Edwina Akufo-Addo and her father shared the dance floor and moved their bodies to the music.

The first lady, R ebecca Akufo-Addo was also spotted in the background dancing to the tunes at the event.

The second family, Dr Mahamudu Bawumia and his wife Samira Bawumia were not left out of the fun as they both displayed some dance moves.