The Lone Stars Liberia will host the Super Eagles of Nigeria in Tangier, Morocco in a 2022 FIFA World Cup World Cup qualifier next month, reports Completesports.com.

The encounter is billed for Thursday, November 11.

The Lone Star have played their home games in the World Cup qualifiers in Accra, Ghana following a ban on their home ground Samuel Kanyon Doe Stadium, Monrovia by the Confederation of African Football

Tangier , Morocco has now officially been confirmed as the venue for the matchday five encounter.

READ ALSO:   Watch How Stonebwoy Thrilled His Fans At The 2021 YAM Carnival In London
The Super Eagles defeated Liberia 2-0 on matchday one at the Teslim Balogun Stadium, Lagos.

Currently Liberia is at the bottom of the standings with three points with Central African republic third having recorded four points. 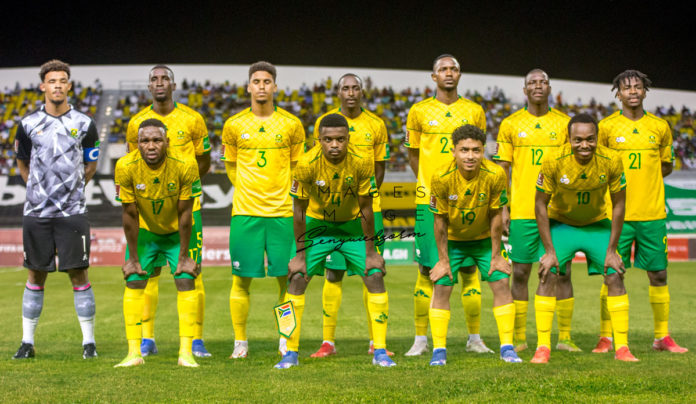 20222 WCQ: ‘We Suspect A Fixed Match’ – SAFA Appeal To CAF And FIFA For Replay Of Ghana’s Game The Chief Executive Officer of the South African Football Association, Tebogo Motlanthe, has said that they suspect a foul play in the FIFA World Cup qualifier defeat to the Black Stars.

He has alleged that match-fixing was at play at the Cape Coast Sports Stadium as the Bafana Bafanas lost the Group G playoffs spot following their defeat to the Black Stars.

Senegalese referee Moguetta Ndiaye penalized South Africa defender Rushine De Reuck for a foul on Black Stars Daniel Amartey in the 32nd minute as the two players were in a scramble from a corner kick.

Black Stars captain Andre Dede Ayew sored from the spot to mark his 100th national team appearance with a goal thereby winning the game for Ghana.

“We suspect the game was fixed and our position is that it must be investigated. The conduct of the match officials left much to be desired and we want both CAF and FIFA to investigate. We salute the boys and the technical team for the good work they have done,” Motlanthe told TimesLive in an interview.

“We went to the match commissioner [Kachalla Babagana Kalli from Nigeria] after the game and told him our intention to lodge a complaint with both Fifa and CAF on how the officiating of the game was.”

“It was a daylight robbery. The penalty incident was not in isolation. We’ll be writing an official letter to Fifa and CAF tomorrow [today] for them to investigate the conduct of the match officials,” he added. Following their narrow victory over the Warriors, Bafana Bafana head coach Hugo Broos warned his charges that they will be up against a better team when they face the Black Stars

The experienced mentor was disappointed by his charges’ display despite Bafana Bafana claiming a crucial win over Zimbabwe at FNB Stadium on Thursday.

Teboho Mokoena’s solitary goal earned Bafana a hard-fought 1-0 win over the Warriors and they opened a three-point lead at the top of the Group G standings in the 2022 Fifa World Cup qualifiers.

Broos warned his charges that they will need to produce an improved performance when they take on Ghana on Sunday with the Black Stars placed second on the group standings after drawing 1-1 with Ethiopia on Thursday.

“I’m happy with the result but not with the performance, we didn’t do a very good performance today, the opponent was more aggressive than us,” Broos told SABC TV.

“They were better on the ball, we were a little bit soft today, I don’t know why, lucky for us it was 1-0 and they didn’t score because they had chances also, so I can’t be happy with the performance today.

“Ok, we’re in a good position, we go to Ghana but we have to know the performance has to be much better on Sunday because we’ll be playing against a much better team also.”

Bafana will travel to West Africa where they are scheduled to face the Black Stars in their final Group G game at Cape Coast Sports Stadium and they will advance to the next round of qualifying if they avoid a defeat.

“So again I don’t know what happened today with my team, they were not aggressive, I don’t know why but again we won the game and that is the most important,” he continued.

“We wanted to change because you could see it was not good, it was not only one player, it was all the team, we tried to change somethings with other players,

“It was a little bit better but again. We missed the aggression today, we lost every duel and this is not good.”

Mokoena scored after a beautiful team move with Keagan Dolly grabbing an assist which impressed Broos, but the Belgian tactician wants to see more from his charges against Ghana.

“Yes, it was a good opener, we scored on a set-piece, this is something where we’re strong but again on the other side it was not good today, not enough and I hope we will do better on Sunday,” he added.

“We’re in a very good position, we’re three points ahead but in Ghana if they score three times do we qualify to the next round? So we’re happy with it.”