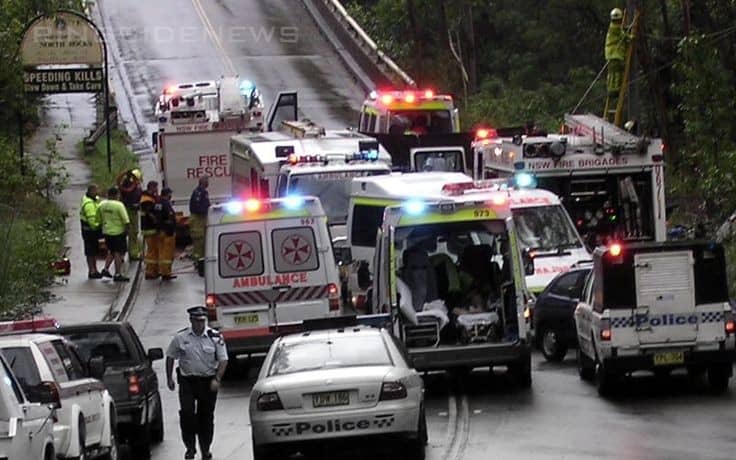 An unfortunate accident that occurred in the early hours of Monday morning, July 12, 2021, has claimed a life leaving 3 others in a critical condition on the Accra-Tema Motorway road.

The report indicates that another attendant who is believed to be visually and hearing impaired also sustained various degrees of injuries after he was pulled out of the wrecked booth.

Giving an account of what occurred, an eyewitness at the scene of the accident said the speed at which the truck was coming was evident that something was definitely not right. He added that it could either be that the driver was inexperienced or his breaks had failed.  He said “I saw the tipper driver rushing to the booth at the Tema side. The rate at which he was speeding showed that something was definitely going wrong. Either his brake had failed or he was an inexperienced driver. By the time we realized, he had run into the toll-booth, killing the attendant”.

Monday’s crash adds to the numerous accidents that have occurred already this year and taken numerous lives while leaving several others injured. Per statistics from the National Road Safety Authority (NRSA), road crashes have killed more than 1,000 people in the country from January to April 2021. Most of these accidents are caused as a result of drunk driving, and non-adherence to road traffic regulations as well.

READ ALSO:   Instagram Ranks Davido As Highest Paid Influencer Above Wizkid And 6 Others

Sudan’s Prime Minister Abdallah Hamdok has been “kidnapped” in his Khartoum home alongside his wife in the early hours of Monday morning, according to a statement on the Ministry of Culture and Information’s Facebook page.

It says what happened represents a huge infringement of the constitution and a “complete coup”.

The statement called on Sudanese people to take to the streets in peaceful protest to do all they can to “protect their revolution”. 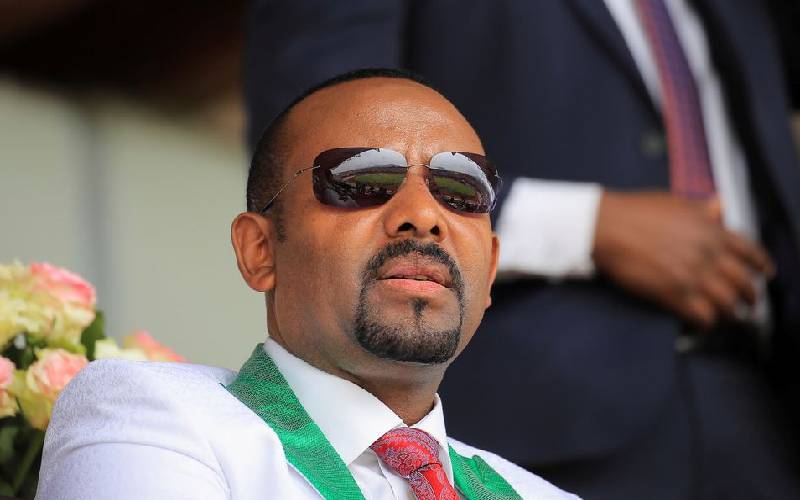 Ethiopia’s parliament confirmed incumbent Abiy Ahmed as prime minister for a five-year term on Monday, cementing his power domestically amid mounting international concern about his government’s handling of the conflict in northern Ethiopia.

Abiy’s party won a landslide victory in June’s election. He was sworn in on Monday, and a ceremony was being held later in the capital Addis Ababa attended by several African heads of state.

President Sahle-Work Zewde told parliament on Monday that government priorities included easing inflation – which has hovered around 20% this year – and the cost of living, as well as reducing unemployment.

The United Nations has warned that hundreds of thousands of people are experiencing famine in Ethiopia’s war-ravaged northern region of Tigray.

Conflict broke out there 11 months ago between federal troops and forces loyal to the Tigrayan People’s Liberation Front (TPLF), the political party that controls Tigray.

Thousands have died and more than 2 million people have been forced to flee their homes.

On Thursday, Ethiopia announced it was expelling seven senior United Nations officials and gave them 72 hours to leave, a move the U.N. rejected.

Ethiopia accused the U.N. officials of diverting aid and communication equipment to the TPLF, failing to demand the return of aid trucks deployed to Tigray, violating security arrangements and spreading misinformation.

The United States also condemned the expulsions and warned that it would not hesitate to use unilateral sanctions against those who obstructed humanitarian efforts.

Abiy Ahmed was appointed prime minister by the then-governing coalition in 2018 and promised political and economic reforms.

Within months of taking office, he lifted a ban on opposition parties, released tens of thousands of political prisoners and took steps to open up one of Africa’s last untapped markets.

His government now faces accusations from rights groups that it is rolling back some new freedoms, which it denies.

In June’s vote, Abiy’s Prosperity Party won 410 of the 436 parliamentary seats that were contested, out of a total 547 seats. Security and logistical problems delayed voting in the other 111 seats.

The opposition parties Ezema and the National Movement of Amhara (NAMA) each won fewer than 10 seats in the June vote.

On Sept. 30, an additional 47 constituencies voted. Results from those regions have yet to be announced, but will not affect the overall result. 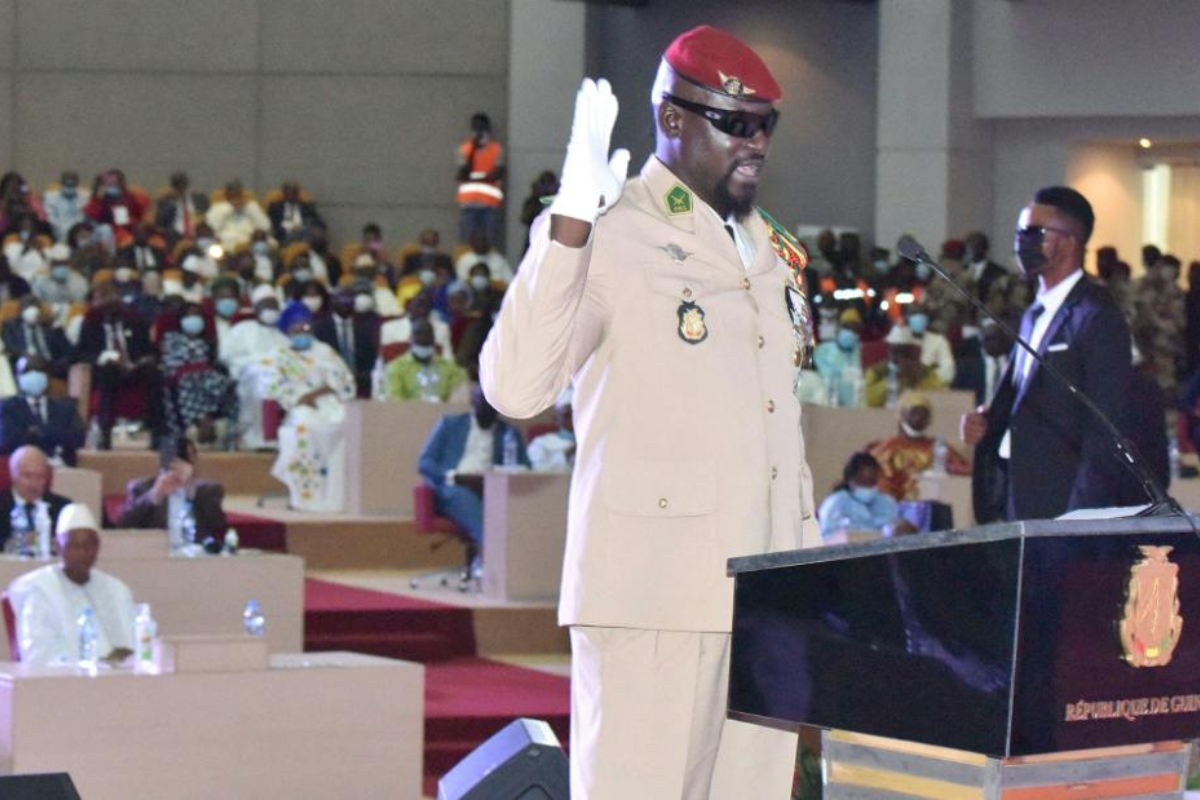 Guinea’s Coup Leader, Col Mamady Doumbouya has been sworn is as Guinea’s interim president after leading a coup that saw the overthrow of Alpha Condé.

Under proposals to restore civilian government revealed this week, Col Doumbouya will be forbidden from running in future elections.

The coup which was initiated on September 5th was widely denounced.

Guinea has been suspended by both Ecowas and the African Union.

Ecowas also imposed penalties on the coup leaders and sought a six-month period of constitutional order.

According to the AFP news agency, the new President, Col Mamady Doumbouya while speaking at the Mohammed V palace in Conakry said that said his purpose was to refound the state by establishing a new constitution, combating corruption, altering the electoral system, and holding free, genuine, and transparent elections.

He also stated that he will honor all of the country’s national and international commitments.

Guinea’s military regime has not stated how long elections will take to conduct.

Nevertheless, it states that anyone who contributes to the interim administration, which will have a civilian prime minister, will be ineligible to run for office.

Meanwhile, the former president, Alpha Conde’s whereabouts remain unclear after he was detained by Col Mamady Doumbouya and his military team.